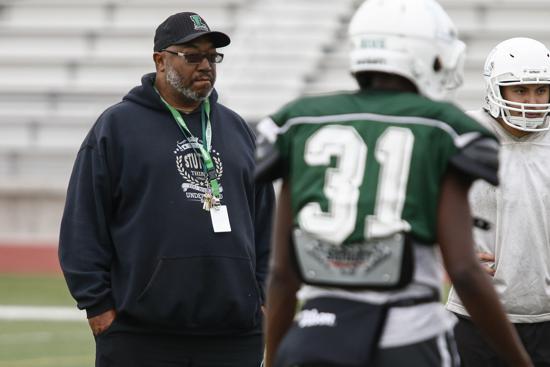 Lincoln High football coach David Dunn admits he doesn’t do a lot of coaching in the summer.

“I like to stand back and observe,” he said. “I like to let my assistants coach and the players play.”

What Dunn witnessed during the recently concluded summer 7-on-7 passing tournaments was a dominant Hornets squad.

Lincoln started the summer winning the Madison Tournament, winning at Hilltop, winning at USD and finished by beating Torrey Pines on the last play at Southwestern College in the semifinals, then beating to take home a fourth summer championship.

The Hornets lost to Premium Supreme, an all-star team, in the championship game of the Tournament after beating that team by 21 earlier in the day.

USCfootball.com said, “It was clear Lincoln wide receiver Keyshawn Smith wanted to make a lasting impression on the Trojans coaching staff. Smith made the tough catches over the middle, but mainly stretched the defense for big yardage down the sidelines.

“Smith has scholarship offers from schools, but showed he’s definitely a Pac-12-level player. Wide receiver is the one position USC has plenty of good options, so while Smith may not spring to the top of the Trojans target board, he will be a player to watch for this season. Smith has the ability to play inside or outside receiver spots in a spread offense with his speed and 6-foot, 180-pound frame.”

“The main thing I want to see is how we compete,” Dunn said.

“We beat Premium earlier at USC, then got a little full of ourselves and lost in the final.

“The most-intense game we played was against Torrey Pines in the semis at Southwestern. For the third year in a row, the game came down to the wire (Lincoln winning on the last play).

“Torrey Pines is going to kick some butt this season.

“I want to see how we pull together in those kinds of games.

“I want to see who my leaders are. The kids want to know who the captains are. I tell them that’s something they determine through their play, their work in the weight room and work in the classroom.

Dunn said that while most observers see Lincoln as just a group of skilled athletes who should dominate in 7-on-7 situations, the Hornets are a well-rounded squad.

The Hornets were 11-5 last season, beating Mira Mesa 23-3 in the San Diego Section Division II title game and edging Culver City 54-42 to win the SoCal 3-AA championship before traveling to Redwood City and falling 21-7 to Menlo-Atherton in a state title contest.

Success over the last three seasons — a 27-12 record — means Lincoln moves to Division I in the San Diego Section this season and possibly into the Open Division.

La Costa Canyon Tournament: Torrey Pines beat Ramona to win the Gold Division. The Falcons beat El Camino (38-8), (34-12), Westview (28-8), Vista again (35-10) and (34-14) on the way to the title. Oceanside, which has used four quarterbacks this summer, was unbeaten before losing to Torrey Pines in the semis. Scripps Ranch beat to win the Green Division. The Falcons beat LCC, Rancho Bernardo, Rancho Buena Vista and on their way to the title. Vista made a nice impression, and Mt. Carmel had wins over Valley Center and Del Norte before losing to Oceanside and San Marcos.

Escondido Tournament: La Costa Canyon went 6-0, beating San Marcos in the semis and El Camino in the final. Quarterback Marshall Eucker, who had 15 TDs without an interception in a tournament in Orange County, had a tremendous summer.

Southwestern Tournament: Lincoln won the 31-team event. Crawford was 3-0 before losing in the quarterfinals along with El Camino and Eastlake.

Nov. 8: First round of playoffs for Division I through Division V

Nov. 15: Quarterfinals for Division I through Division V

Nov. 22: Semifinals for Division I through Division V

Nov. 29-30: Championships for Division I through Division IV at Southwestern College