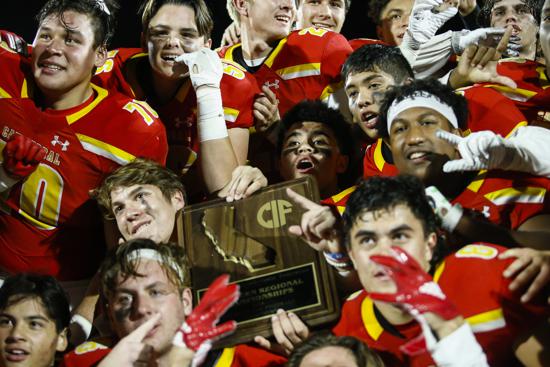 Cathedral Catholic is starting the 2019 high school football season right where it left off in 2018 — ranked No. 1 in the San Diego Section.

The Dons finished last season 12-2, losing 19-7 to La Costa Canyon in the season opener and to Folsom 21-14 in overtime in the state Division 1-AA championship.

Cathedral Catholic was a fourth-quarter first down away from winning that game.

Star running back Shawn Poma has graduated, but Cathedral is big and talented on both sides of the ball.

The Dons garnered 20 of 31 first-place votes in the Union-Tribune Preseason Poll, which includes voters from newspapers, TV, radio, websites as well as section officials.

MaxPreps has Cathedral Catholic ranked No. 13 in the state and No. 45 in the nation.

“Honestly, I don’t care if we’re No. 1, 10 or 100 because preseason stuff doesn’t mean anything,” said Cathedral Catholic coach Sean Doyle.

“Sure we read it. It makes for great conversation. Sure the kids, the fans like it. And I know the people voting have to start somewhere.

“The preseason, though, is the hardest to pick because you don’t have a lot of information. It’s not like college where there is a ton of information — TV, magazines — out there.”

Lincoln, a third Western League team, is ranked No. 5.

Helix is third in the preseason poll and received the other first-place vote. Steele Canyon is No. 10.

“Being the preseason No. 1 just means we have a bigger target on our backs,” Doyle said. “Rankings mean more at the end of the season.