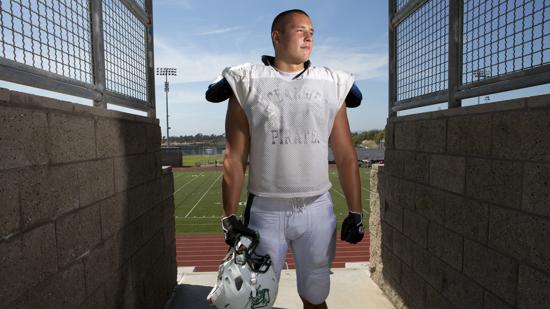 A 6-foot-3, 230-pound Oceanside High senior swims through an offensive tackle, runs over a helpless running back and sacks the quarterback. An intimidating celebration of intense helmet-smacking quickly ensues.

No, it’s not the late Junior Seau, a fellow Oceanside alum. But the pass-rushing freight train known as Jordan Smith has drawn comparisons to one of the greatest Chargers of all-time and is just as relentless on the football field.

“He’s an A+ player on the field, and an A+ kid off the field,” Oceanside coach John Carroll said. “He’s mentally and physically tough and leads by word and by deed.”

Smith will lead the stout North defense against the South offense in Friday’s Alex Spanos All-Star Football Classic. The game, presented by the Chargers and the San Diego High School Sports Association, gives graduated seniors one last sniff of high school football before their college or work lives begin. The South, roughly separated from the North by state Route 56, won last year’s game 27-7.

Smith helped lead Oceanside to a section Division II championship in 2010, and his success on the gridiron has earned a lot of attention from San Diego coaches and fans alike.

“I was approached to play in the Southern California-Arizona all-star game, but I chose the (Spanos Classic), because it gave me a chance to play with teammates who were my enemies during the fall,” Smith said. “And it gives me one last chance to play in San Diego in front of friends and family.”

Success has been hard won for the Oceanside native. Smith’s freshman year, he faced an opponent even he couldn’t get around: discipline. His bad grades led to a suspension from school.

“That was my low point.” Smith said.

Instead of living up to the dumb-jock stereotype, as a sophomore Smith took some advice from his father, Jeff Smith, and Carroll.

“They helped me realize that being a student-athlete could take me somewhere, so my sophomore year I worked just as hard in the classroom as I did on the field,” Smith said.

That hard work translated into good report cards as Smith graduated as a member of the U-T San Diego All-Academic Team.

After high school, Smith wanted to do something different.

“I wanted to go to a school with a lot of tradition, a lot of success and also to serve my country,” said Smith, who has committed to play football at the U.S. Military Academy at West Point. “After I graduate (from college) my main objective is to serve five years active duty.”

An intense leader on the field, a soft-spoken student off, Smith has football is in his bloodlines. His brothers Josh and Jacob played at Oceanside and were the reason their little brother started playing in third grade.

“My brothers are my inspiration,” he said. “When I was going through a rough patch, they would push me to get better.”

When asked to describe his play in one word, Smith shrugged and said, “Mean.”

“We are loaded with talented kids on the defensive side, but (Smith) stands out,” said North coach Mike Woodward of Westview. “He shows up with a smile and plays the game the right way. He’s a beast.”

Said Carroll: “He’s mentally and physically tough, and a selfless team player. West Point is very fortunate to have such a well-rounded individual.”