Imagine the Yankees being told to change their pinstripes. Or the Dallas Cowboys without their lone star. Think University of Michigan football minus the maize-and-blue winged helmets. 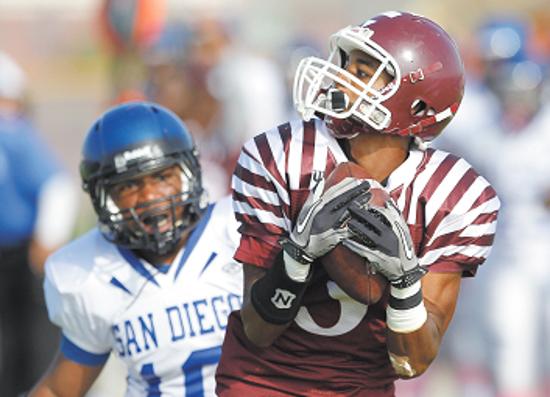 Imagine the Yankees being told to change their pinstripes. Or the Dallas Cowboys without their lone star. Think University of Michigan football minus the maize-and-blue winged helmets.

In order to comply with a newly enforced national rule, the Komets must change what many believe to be the most distinctive high school football uniforms in the region.

Designed by former Kearny coach Birt Slater, the vertical stripes that run across the shoulder pads have been a Komets trademark for decades.

“We won the league my first year (1959), but in 1960 we weren’t very good, so I went home and tried to figure out what to do,” Slater told the U-T’s Steve Brand a few years ago. “I was watching a game and saw this outrageous uniform with stripes. I figured we damned well couldn’t lose wearing that uniform. We’d either win and be proud or we’d get laughed at.”

Wearing their newly fashioned stripes, the Komets went 7-3 in 1961 before winning San Diego Section titles in 1963 and 1964. The uniforms became part of Slater’s legacy.

But beginning this season, those bold vertical stripes will be substituted with a less-distinguishing look. A 2007 ruling by the National Federation of State High School Associations has made the change necessary.

According to the national federation, decorative stripes added in the shoulder area are not to exceed 3.5 inches in length. Kearny’s stripes are longer than 3.5 inches and also fail to meet one other standard.

Reaction to the change has not been favorable.

“The stripes on the Kearny jersey aren’t just stripes. They represent something much bigger and much deeper than a maroon and white line,” said Cheryl Hibbeln, principal of digital media design at Kearny, who oversees athletics. “They represent years of a football tradition that is incredibly important to this community.”

Don Norcross, a U-T San Diego staff writer who played quarterback for the Komets championship team of 1973, said he was disappointed with the change.

“We took tremendous pride in wearing those jerseys because they were distinct,” Norcross said. “If you made the varsity, you earned the right to wear that jersey and you wore it proudly.”

Kearny’s new uniforms, which cost $4,500, were scheduled to arrive this morning, just in time for the Komets’ season-opening game at 7 tonight at Castle Park High.

The new rule apparently is a move to tighten up an old rule.

Jerry Schniepp, commissioner of the CIF’s San Diego Section, said a 2003 decision to loosen uniform regulations allowed high schools to do whatever they wanted with their jerseys.

Over the next four years, the national federation received many complaints and concerns, resulting in the new rule.

“Schools were going crazy with their uniforms and doing whatever they wanted,” Schniepp said.

From 2007 to 2012, the rule was in effect but not enforced. It was not until this season that schools were told to comply. Failure to follow the jersey rule will result in a 15-yard unsportsmanlike penalty on the head coach at the beginning of the game.

“In a small way, we have preserved what’s important to us,” Hibbeln said.

Pending approval, Kearny is planning to wear the old jerseys one game this season for “Throwback Night” if the opposing team and game officials agree. The school is hoping to combine “Throwback Night” with homecoming.

“That’s going to be huge for us this year, especially for our alumni,” said Kearny football coach Kenny Nears, a former wide receiver and safety for the Komets who guided his alma mater to the playoffs last season.

The old stripes are gone, but the tradition of Kearny football is not.