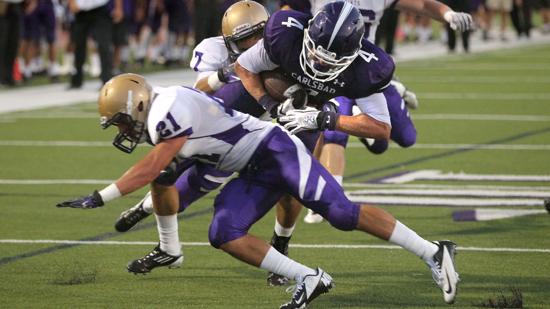 Carlsbad’s Jordan Perez is brought down by St. Augustine defenders Mitch Cohen (21) and Tristan Juarez (7) on the 1-yard line.

CARLSBAD — When St. Augustine senior defensive end Robert DeCort saw a loose ball lying on the field during the fourth quarter of the Saints’ season opener Friday night, there was no way he was going to just fall on it.

DeCort has watched SportsCenter too many times.

The Saints (1-0) trailed 13-0 at the end of the first quarter before reeling off 23 straight points. St. Augustine outscored the Lancers 16-0 in the fourth quarter, and DeCort’s touchdown was St. Augustine’s second in 28 seconds.

“Every single morning on ESPN, I watch some defensive end, some corner, some safety pick up that ball and run,” said DeCort, whose score broke a 13-13 tie with 8:14 to play in regulation.

“As soon as I picked it up, I was just like, ‘Wow, this is my moment to shine.’ And I locked my arms, ran as fast as I could and got the touchdown.”

Junior running back Tyler Herburger rushed for 111 yards and two touchdowns on 27 carries, and freshman running back Elijah Preston added 71 yards on seven carries for St. Augustine, which beat Carlsbad to open the season for the second straight season.

Junior kicker Nick Sinclair booted a 31-yard fourth-quarter field goal after DeCort’s touchdown to put the game out of reach.

Senior wide receiver Tyler Crayton caught five passes for 123 yards, including a 58-yard touchdown in the first quarter that gave the Lancers an early 6-0 lead.

Carlsbad scored on its first two drives and led 13-0 at halftime, but St. Augustine turned the game around in the second half.