After state bowl victory in 2011, Helix opens season with convincing win over Eastlake 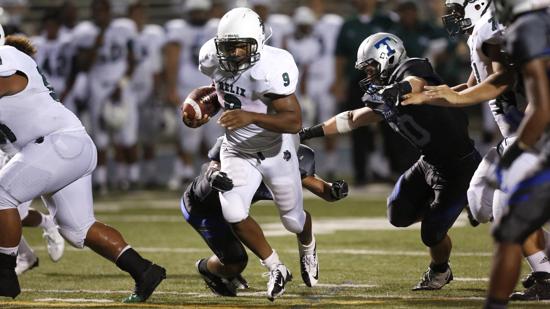 Too many new faces.

“We know we have a target on our back,” Starr admitted.

Fourth-ranked Eastlake loaded up the musket Friday night, took aim at the Highlanders, scored some direct hits, but in the end, the Highlanders demonstrated why they’re ranked No. 1 and still the team to beat.

Helix dealt host Eastlake a 28-6 defeat before a packed house at Stan Canaris Stadium in the season opener for both teams. The win avenged Helix’s only loss last season, a 21-14 Eastlake upset on opening night.

“To beat them, to beat them at their place, to take care of business, yes, it feels good,” said Helix running back Michael Adkins.

Starting his first game at quarterback for Helix, junior Josh Harris turned in an efficient game, completing 8 of 13 passes for 128 yards and 1 touchdown.

Helix averaged 42.6 points a year ago, but its suffocating defense often was overlooked. Not last night. The Highlanders forced five turnovers. Junior Jalen Davis intercepted two passes. Were it not for a fumbled snap on a punt, Helix might have pitched a shutout.

“That was a war,” Starr said. “A war of attrition. An absolute war of attrition. We have a lot of new guys and they need to step up. But our kids are tough, mentally and physically. They will themselves to play well.”

The game did not begin well for Helix. On the Highlanders’ first drive, a bad punt snap gave Eastlake the ball at the Helix 25. Seven plays later, the Titans assumed a 6-0 lead on a 2-yard run by Jalen Mondane.

Helix’s second series ended in a punt. So did the third. The Highlanders, though, are loaded with explosive skill-position athletes, which senior Kendal Keys demonstrated.

Keys hauled in a second-quarter Harris pass, made one defender miss, scooted past another, then angled across the field for a 47-yard catch and run.

“People say we’re not the same team as last year, and we’re not,” said Adkins, who averaged more than 10 yards per carry a year ago. “The major difference is we don’t have as much depth.

“But we’ve still got skill guys who can make plays.”

That they do. The Highlanders showed off a Wildcat attack late in the first half resulting in a second TD, Adkins’ 2-yard run.

Up 14-6 at the half, the Highlanders took the second-half kickoff, marched 71 yards, keyed by a 39-yard pass. Adkins enjoyed the scoring honors from 5 yards out.

Gone from last year’s Helix team is quarterback Brandon Lewis, who passed for 3,004 yards and 37 touchdowns. Gone, too, is running back Darrion Hancock, who rushed for 1,326 yards and 21 touchdowns.

The Highlanders, though, appear not to be rebuilding, but reloading.

“What you’re seeing,” said four-year starting lineman Milo Amu, “is a lot of guys stepping up.”