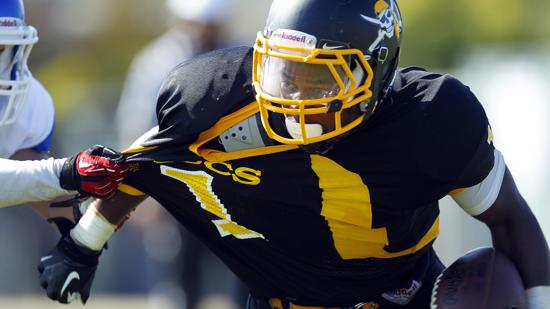 Mission Bay's Devante Kiner, who rushed for 109 yards on 16 carries, has his jersey pulled by an Orange Glen defender.

Key plays: Orange Glen RB George Loa raced up the middle for a 42-yard TD midway through the second quarter ... Mission Bay QB Nick Plum’s third-quarter touchdown pass was tipped by the defense but ended up in the arms of WR Andre Petties-Wilson ... Plum connected with TE Kelly Weese on a 10-yard TD pass to take the lead early in the fourth quarter.

Quotable: “We definitely thrive off (the defense),” Plum said. “The score says it all. It was definitely a defensive victory.”

More quotable: “Our defense kept giving us chances after chances, but without an offense that can take advantage of it, it’s going to be rough,” said Orange Glen coach Kris Plash. “I’m very happy with our defense.”

Never done that before: A fourth-quarter blocked punt left host Mission Bay just 4 yards from the end zone and a two-score lead. Three plays later and 1 yard out, Bucs coaches called a QB sneak for Plum, which he barely converted. It was the first rushing touchdown for the junior at any level of football, but coach Willie Matson couldn’t help but laugh about the conversion. He said Plum looked like a “curled-up caterpillar” until he extended the football into the end zone.

Can’t touch this: Orange Glen coaches pass out hammer stickers for their players’ helmets if the Patriots offense scores 14 points in a quarter with no turnovers, or if the defense allows no points with a turnover in a quarter. Unfortunately for the Patriots, it wasn’t hammer time.

Early exit: Orange Glen senior QB Austin Early was knocked out midway through the second with a shoulder injury, but there was no prognosis. The Patriots struggled to move the ball on offense with just one play longer than 10 yards following his exit.

Stacked deck: Mission Bay’s defense hit its stride with a three and out late in the second. With Early out, the Bucs stacked the box with nine defenders, and two runs by new QB Josh Spina resulted in losses of 6 and 7 yards. A bad snap for another loss of 6 ended the drive.

Settle down now: Mission Bay committed three first-half encroachments and a false start. The Bucs responded after a halftime speech from the coaches, who said it was just a product of finally getting on the field in game situations.

Cheerleading receiver: When Orange Glen receiver Austin Cosler wasn’t playing offense, he was firing his team up on the sidelines. The senior was the vocal leader for the Patriots, starting a number of chants. He even got the Mission Bay sideline to respond with their own cheers, but no one was as loud as Cosler.

Big-play Devante: Mission Bay running back Devante Kiner had a number of big runs, including a 26-yarder that set up Plum’s second TD pass. He didn’t have any scores but finished with 109 yards on 16 carries.

Welcome back: MLB Neil Bonahoom is Orange Glen’s defensive leader but missed all of last year with a back injury. The senior will lead the team’s ceremonial charge onto the field with its sledgehammer in the home opener in two weeks, against Saddleback.