Foothillers storm back in fourth quarter, plus other notes from Friday night 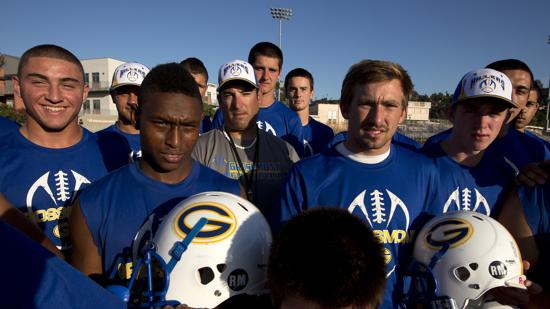 Grossmont players and coach Tom Karlo lined up following a practice last week as they prepared for Friday's opener against Ramona. The players wear the initials RM on their helmets to honor former coach Ron Murphy, who died in February.

But starting at some unofficial time in the fourth quarter, the Grossmont offense was. Finally.

The Foothillers scored three touchdowns in the final frame, coming back from a 24-7 deficit to capture a 28-24 win.

“We were ready to do an onside kick when we were down by 10,” Grossmont coach Tom Karlo said, “and the refs came over and said there’s seven minutes left, not three. We ended up not onside kicking it. It was kind of unique.”

Afterward, Karlo handed the game ball to team statistician Luke Murphy, son of Ron Murphy, the Foothillers’ coach the past three seasons who died of cancer in February. Dani Murphy, Ron’s wife, stood by Luke’s side. She still runs the snack bar at Grossmont home games.

“I felt like it was important to give them a gesture from our team, thanking them for their support,” said Karlo, who previously coached at Mount Miguel.

Grossmont’s helmets this season feature a black sticker with the initials RM. The first game played in memory of Ron Murphy turned on a goal-line stand in the fourth quarter. After the Foothillers took over on downs, they drove 99 yards to cut the deficit to 24-14. Two more touchdowns followed.

“I’m sure,” Karlo said, “the kids will remember that for a long time.”

No stripes, no problem. Or is there?

Kearny opened the season with a 33-12 win at Castle Park, recovering three fumbles and surrendering just 55 yards of total offense. It was the Komets’ first game playing in something other than the distinctive uniforms that had defined the program since 1961.

The new jerseys, minus the long vertical stripes that ran across the shoulder pads, arrived just in time, around 2 p.m. Friday. While the colors remain maroon and white, the stripes on top of the shoulders have disappeared, leaving three thinner stripes on the sleeves. The Komets made the switch to conform with a National Federation of State High School Associations rule.

“Some of (the players) are still trying to keep the pride, the tradition, so some are pretty upset,” said Kearny coach Kenny Nears, a former receiver and safety for the Komets. “It definitely gave us a little extra animosity.”

But for Nears, the uniform controversy can wait.

“I don’t think it’s a huge thing for me at the moment,” he said, “because there are other things that we need on campus.”

“We had our field pushed back two years,” he added. “After the success we had last year (going 8-3), you’d think we’d be given more instead of getting things taken away.”

Not helping matters: The new uniforms came at a price of $4,500.

“Hopefully,” Nears said, “we don’t have to use ASB money” to help pay for them.

For the most part, Oceanside coach John Carroll liked what he saw in the Pirates’ season-opening 34-14 victory against Oakdale. Senior quarterback Tofi Paopao threw three touchdown passes in the first half, and the defense did not allow a touchdown until the fourth quarter.

“It was a very high-energy, up-tempo offense,” Carroll said. “Our kids did a great job (defending it).”

Despite the ease of the win, Carroll said his team needs improvement if it is to return to its former glory. A 44-6 loss to Helix in last year’s San Diego Section Division II title game ended Oceanside’s run of seven straight section championships.

Francis Parker’s Gabe Harrington produced one of the county’s biggest performances Friday. In a 42-3 win against Coronado, the senior completed 12 of 16 passes for 264 yards and four touchdowns. Harrington also ran for a score. The 6-foot-4 quarterback sports a 3.7 GPA and has drawn interest from Princeton, Harvard and other Ivy League schools.