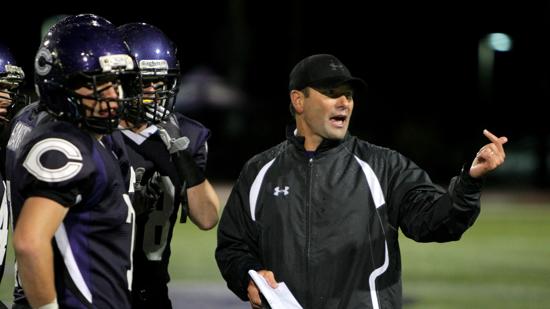 CARLSBAD — In April 2011, Thadd MacNeal made the surprising decision to leave Lakewood, a program he had built into one of the best in Southern California. It was certainly defensible seeing a talented coach leave the Pac-5 Division, home of some of the top high school football teams in the country, but few would have predicted he would land where he did.

MacNeal traded one Lancers program for another, agreeing to become the next head coach of the Carlsbad football team.

The connections are easy enough to follow, as MacNeal grew up in North County and attended Carlsbad High. The decision to leave the Southern Section for the smaller San Diego Section, however, left some scratching their heads.

The gap between the two sections isn’t as wide as it seems if you ask MacNeal, however.

“There are more schools in the Southern Section, and certainly a higher density of schools right next to each other in a more populated area,” MacNeal explained. “It’s pretty extreme there, but there are some quality programs here, just not as many as there are up north.”

MacNeal has a ways to go to build the Carlsbad program into anything that can compete with the Lancers’ to the north, but the second-year head coach has a history of pulling off the unthinkable. In 2009, he and Lakewood downed Long Beach Poly, ending the Jackrabbits 80-game Moore League winning streak en route to proving Poly’s program was mortal.

Now he hopes to do the same for Carlsbad.

“This is our first full offseason together, and we’re moving in the right direction,” MacNeal said.

Part of that optimism stems from the fact that the Lancers started seven sophomores on last season’s team that went 7-5. Twelve-hundred-yard rusher Sean Cameron returns, as does first-team receiver Jordan Perez. MacNeal points to the quarterback position as the one to watch, however, and that’s junior Christian Chapman, who started four games for Carlsbad a season ago.

“He’s very, very good, has a couple of scholarship offers already,” MacNeal said. “It starts with him.”

Chapman will be thrown into the fire immediately, playing what MacNeal says might be the most difficult schedule in San Diego this season.

“We’ve got a very challenging preseason slate, and the Avocado-West League, it reminds me of the Trinity League in the Southern Section. Top to bottom, it’s a really, really competitive,” he said.

Others inside the Avocado League think MacNeal is just being bashful, as Carlsbad is expected to take a big step forward in MacNeal’s second season.

“They’re going to be very good this year,” one Avocado-West League coach said earlier this summer. “It wouldn’t surprise me if they competed for (a) league (championship).”

As for MacNeal himself, his expectations are set on seeing his team compete with the better programs in the county.

“In the four games we played against top teams — La Costa Canyon, Poway, Oceanside and St. Augustine — we weren’t very competitive,” MacNeal said. “I want to see our team fight through those games and hang in there, and I believe we will.”