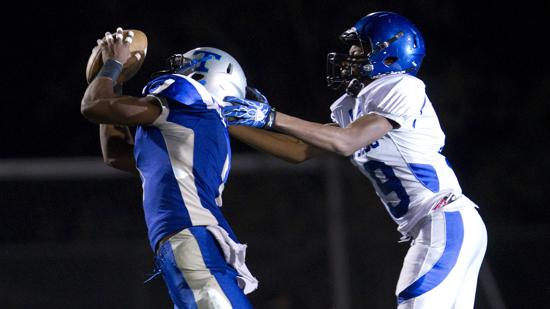 Aaron Baltazar, who also plays running back, intercepts a pass for Eastlake.

When the tears began, welling up in the corners of his eyes and edging onto his cheeks, Aaron Baltazar fought back. Sometimes he won.

Other times, during the months his father spent nearly 8,000 miles away, Baltazar surrendered to the onrush.

In January 2003, Jun Baltazar gathered his family, including wife Amabelle, who was pregnant with their first daughter, in his arms before leaving for Iraq. Jun, a United States Marine, could no longer attend every practice and every game. Aaron, now a senior running back and safety at Eastlake High, was a rising star on his Mighty Mite football team.

But that season Aaron, then 8, scored just one touchdown. It might have been two.

“It was like anything could happen any day,” said Aaron, a 5-foot-11, 198-pound Boise State commitment. “Like we could get a call that something had happened or they couldn’t find my dad.”

Jun returned home that July, having completed his tour. The tears vanished. Aaron remembers collecting about 15 touchdowns the following season.

He had gained discipline from his mother, a former amateur kickboxer. Amabelle, now a registered nurse, regularly shuttles her four children between school and sports.

“My dad,” Aaron, the oldest, said, “is probably my motivator.”

As early as age 7, Aaron accompanied Jun on the commute from Chula Vista to Camp Pendleton. Together, they sprinted up and down hills and cranked out pushups and crunches.

They ran routes on the beach, where Jun, a former high-school basketball player, discovered his son’s raw talent with a football. Aaron rarely dropped a pass, even if it meant barreling into the cement trash cans spread out among the sand.

“He’s a very natural athlete,” said Jun, who after returning from Iraq served in the Marine Corps Reserve until 2007. “He’s good at basketball, but he got even better at football.”

Since the end of his sophomore year Baltazar has received scholarship offers from Arizona, Boise State, Cincinnati, San Diego State, UCLA and Washington. ESPN.com tabs him a four-star prospect and the nation’s 27th-best running back in the Class of 2013.

In June the former Washington pledge committed to Boise State. A campus visit had wowed Baltazar, who shook hands with Broncos coach Chris Petersen and walked on the same blue turf he had seen on television and in games of “NCAA Football.”

Baltazar plans to study kinesiology and decommitted from Washington this spring, partly, he said, because the school does not offer the major. Last December he made a “soft verbal” to the Huskies.

“I didn’t feel wanted,” Baltazar said of his second and final trip to Seattle, adding that the entire Boise State coaching staff converged for his visit to Idaho. “When I went up to Boise, I was like a rock star there.”

With his bleach-blond mohawk and chiseled build, Baltazar might resemble a rock star, but coaches and teammates provide a different picture.

John McFadden, Eastlake’s 13th-year coach, puts Baltazar in the same class as Oklahoma starting safety and former Titans great Tony Jefferson. The comparisons go beyond the players’ two-way abilities and No. 1 jerseys, which both wear or have worn in high school.

“Tony and Aaron are very much alike,” McFadden said. “They treat everyone well.”

Meanwhile, fellow senior Tavarus Green welcomes Baltazar’s reemergence as the primary ball-carrier in McFadden’s Wing-T offense. Green, who rushed for more than 1,000 yards in 2011, stepped in for his friend last season when Baltazar missed five games with a high ankle sprain and a balky knee.

“It just makes our running back corps even better,” said Green, who, by the way, sports a similarly bleached mohawk, a tribute to the team’s recent graduating class.

After offseason knee surgery, Baltazar says he is back to 100 percent. He left the field only a handful of times in Eastlake’s season-opening loss to defending Division II champion Helix, lining up at free safety and punt returner in addition to his duties on offense.

Baltazar also says he is open to playing either offense or defense for Boise State next fall. Until then, he plans on adhering to his voluntary ritual of pushups before bed, just like Jun taught him.

“I’ve always been proud of his work ethic,” Amabelle Baltazar said. “When my husband was in the Marine Corps, when he’d get up early to work out, Aaron would get up and say, ‘Pop, can I go with you?’ You’d never have to tell him.”