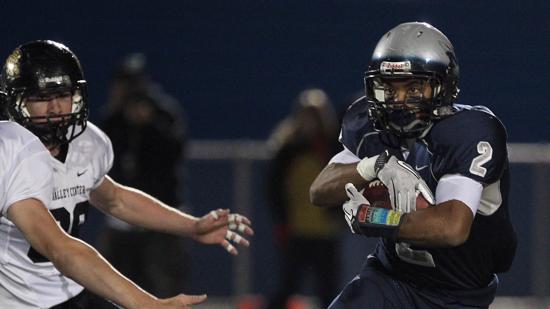 Storyline: A day after Madison’s 20-7 victory over Lincoln, Donnel Pumphrey and Pierre Cormier compared their individual performances via Twitter. Pumphrey a Canyon Springs all-purpose back, asked Cormier how he fared the night before. The ESPN-recognized four-star running back fired back, “I did alright...” Earlier, Cormier described his performance in 140 characters as “ok” and acknowledged that there was “always room for improvement”. A bit modest, perhaps. That “alright” performance — 210 yards rushing, including an 83-yard touchdown run — eclipsed his previous career-high of 188 yards set against Mission Bay last season. To put things into perspective, only 13 local teams rushed for more yards than the Arizona pledge did last week.

The Skinny: Cormier has to be licking his chops. Last week, Valhalla surrendered 253 rushing yards and two touchdowns to Mira Mesa on 40 attempts. The Warhawks certainly won’t abandon the run now. Coach Rick Jackson will undoubtedly ensure that his workhorse eats first each week, especially against the Norsemen. Don’t be surprised to see another 150-plus-yard rushing performance in El Cajon.

Rubia piled on the numbers last season. As a sophomore, he anchored the Eagles defense and made plays all over the field. The All-Sunset Leaguer finished with 117 tackles, 10 sacks, two forced fumbles and three fumble recoveries, including a 26-tackle performance against Kuyper Prep.

After rushing for 933 yards in the final four games of 2011, Reed picked up where he left off, dominating Granite Hills for 231 yards and three touchdowns on 22 carries. He could be in for another huge performance against Sweetwater.

Freeman wowed as a sophomore, rushing for 2,075 yards and 35 touchdowns. While he looks to improve on those lofty numbers this season, he’ll need to be at his best early on against defending Division IV champ Valley Center.