It’s a win by any score

San Pasqual Academy outscores Crawford, but keeping a football team on the field demonstrates a triumph for both schools 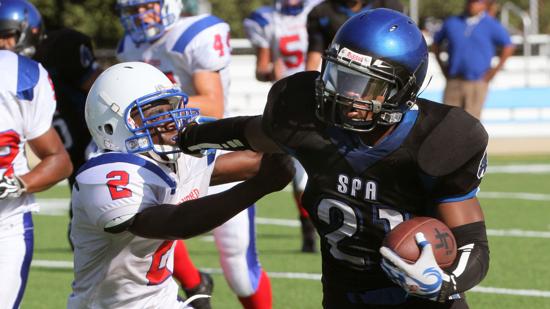 ESCONDIDO — The San Pasqual Academy football field is wedged between orange groves, 19 rows of trees to the east, who knows how many to the west. Beyond the orange trees are palms and leafy Tipuana tipus.

The school, about four miles from the San Diego Zoo Safari Park, is nestled in the San Pasqual Valley, breathtakingly surrounded by mountains you’d swear were photographed by Ansel Adams.

Through donations from Chargers Philip Rivers and Quentin Jammer’s foundations, the scene includes an artificial turf field that was dedicated a year ago. On the scoreboard it reads, “Field of Hope.”

On a toasty Friday afternoon with the temperature pushing 90, San Pasqual Academy hosted Crawford High. Field of Hope served as the perfect setting.

“The average kid has moved at least 10 times (before arriving at the school),” said Burgo, in his third year as head football coach.

“We are a place of stability. Every kid is here, not through the fault of their own. Usually, adults did something wrong with them.”

Crawford, too, knows challenges. The school is set in the inner-city near San Diego State. Nearly one-third of its students are refugees.

“A lot of kids come from countries that don’t even know what football is,” said first-year head coach Michael Wright.

The Colts have struggled between the goal posts of late. Crawford’s record since 2005: 7-60. Two years ago the Colts forfeited their last four games when nine players became academically ineligible, reducing the roster to 10 players.

The homecoming game was played by the junior varsity.

“I was shellshocked,” said Wright. “I thought I had done more than what I witnessed out there.”

The Colts lost again Friday 34-12. The score, though, is misleading. Late in the fourth quarter the Colts failed on a two-point conversion that would have given them a 14-13 lead. The Dragons finished in a rush, scoring the final 21 points.

“You guys played your butts off,” Wright told his team as the players settled on one knee at the sideline. “You fight hard. You’ve got heart.”

“You gotta finish. Focus! We beat their (rears) up and down the field from the five to the five but we didn’t finish it. You understand?”

One of San Pasqual Academy's players is senior running back Sagon Penn, who arrived at the school during the summer.

Last week against Maranatha, Penn didn't show up until halftime. He had a doctor's appointment at 2, needing a clearance because of a hand injury.

Penn wore his football pants to the doctor's office. Cleared, he hustled to the game, playing the second half. His first carry: 74 yards and a touchdown. He finished with five carries for 142 yards and two scores.

"We try to teach them through sports what it's going to be like in the real world," said Burgo. "You have to put forth the effort. You get what you give."

The small bleachers on each side were not overflowing. At kickoff, there were 49 fans on the Dragons’ side, one on Crawford’s. By halftime, Crawford’s attendance swelled to six.

But the game was crisply played. There were no cheap shots, no smack talk. And when the coaches finished their postgame speeches, one San Pasqual Academy player walked hand-in-hand with his girlfriend.