Mustang ‘had my head screwed on straight’ 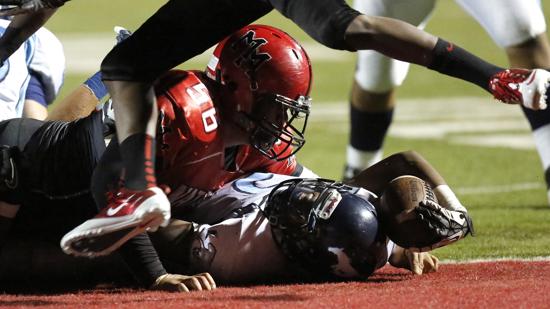 Key plays: On a third-and-goal play from the 1-yard line, Otay Ranch linebacker Jeremy Gula had an interception and 39-yard return. Minutes later, Gula had a fumble recovery at the 26-yard that set up a touchdown and 20-0 halftime lead. “I gotta say the INT was better,” Gula said. Quentin Bell hauled in a 36-yard TD pass from Kyle Hawkins to make it 27-6. Chris Martin scooped up an onside kick and raced 51 yards untouched for the final score. Andres Burgoin booted a 40-yard field goal.

Quotable II: Of his kickoff return TD, Martin said. “Grab it and go. It just shows I had my head screwed on straight.”

Welcome to the ranks: In what probably broke a few records, Mount Miguel’s Shaun McDade won his varsity coaching debut last week in a 50-33 romp of Fallbrook. “Things were working really well offensively,” said McDade, 31, who was a Matadors assistant the past three seasons until Tom Karlo took the head coaching job at his alma mater Grossmont. “I don’t think you ever expect to score 50 points going into a game, but we have the potential.” McDade played linebacker and safety for Mt. Carmel, Grossmont College and Liberty University in Virginia.

Nice month: Mount Miguel’s Brad Moreno won his first start as a varsity quarterback last week throwing for 95 yards and two TDs and running for a TD. Despite the loss to Otay, he threw for 144 yards. Moreno missed the first two weeks of training camp in August while he was playing in the Senior Little League World Series (ages 13-16) in Bangor, Maine. Moreno played pitcher and center field and batted leadoff for the Lemon Grove team that lost to Guatemala in the championship game. Lemon Grove also hosted a parade for their all-stars.

Another great debut: Otay Ranch junior Kyle Hawkins was 19-1 as a JV and freshman QB, and in his varsity debut last week he led the Mustangs on a 99-yard drive late in the game to beat Elsinore 26-21.

No. 2 Dad: Otay Ranch junior Anthony Williams Jr. followed a 153-yard, two TD game last week with 85 yards and the first two TDs against the Matadors. His father, Anthony Williams, played for Mount Miguel in the late 1980s. Like his dad, Williams wears No.?2.

Prilosec impact: Hoffy hot dog for $3 was plump, juicy and hot off the grill. Give it a 4.5 on 5-point scale. Should have toasted the bun for 30 seconds.