In his heart and in his mind, Mt. Carmel High senior Riley Coniglio carries the message of his late father. 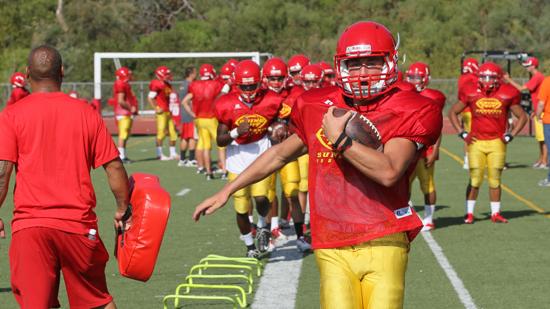 Mt. Carmel safety and fullback Riley Coniglio has helped the Sundevils start the season with a 2-0 record.

RANCHO PENASQUITOS — In his heart and in his mind, Mt. Carmel High senior Riley Coniglio carries the message of his late father.

So, too, do his teammates on the Sundevils football team on their practice jerseys. In keeping with a favorite saying of Mark Coniglio, the shirtfronts proclaim, “Rhino tuff.”

A former player at Humboldt State, Mark Coniglio helped get his son started in the game and became a Mt. Carmel booster as well as a game official for prep games. He died of cancer on Jan. 22, 2011.

“He’d tell me, ‘Even in practice, go 110 percent on every play,’ ” remembered Riley Coniglio, a senior fullback and safety. “Taking a play off, maybe you’ll miss a chance to do something good.”

Sundevils coach John Anderson, who also lost his father at a young age, attended the funeral for Mark Coniglio and later asked Riley about adopting the “Rhino tuff” theme ahead of this season.

“Every game (last year), the officials come up and say, ‘Where’s Riley? We want to hug that kid,’ ” Anderson said. “This tells me how well his dad was liked among the officials.”

Mt. Carmel has opened this season with victories over La Jolla and Fallbrook with a 72-21 combined scoring advantage. Last year, the Sundevils (6-5, 3-1) placed second behind in the Valley League behind Valley Center.

Coniglio earned All-Valley League second-team honors a year ago with 436 yards rushing on 72 attempts in his first full varsity season after suffering a broken collarbone early in his sophomore year.

For a defensive highlight, Coniglio had a 59-yard interception return for a touchdown against Valley Center.

“Riley’s a great guy,” said longtime friend and senior running back Robbie Halliburton. “He’s always out doing everything for everyone. Ever since he lost his dad, he’s just been willing to get everyone help. He’s definitely the senior leader on this team.”

The 5-foot-9, 160-pound Coniglio spearheads the three-back set for the Sundevils in their triple-option attack. At the wingback spots are Halliburton, also a returning all-league second-team pick with 954 yards on 96 carries, and junior Davion Fuller, a speedster up from the JV.

Junior Kory Fox starts at the quarterback after getting his varsity indoctrination at the position late last season as an injury replacement.

Mt. Carmel also gets a boost from senior Deion Alston at wide receiver and defensive back set for his first full season as a starter. A year ago, he initially expected to stop playing football and thus missed offseason workouts, but he then returned and gained increased playing time as the season progressed.

The Sundevils have no returning starters on either the offense or defensive lines. Still, the offensive front has blocking blocks in place with the sizable guard tandem of juniors Michael Chevalier (6-5, 270) and Peter Pavilando (6-4, 260).

Coniglio, who hopes to play in college, gained 15 pounds during the offseason while also working on his skills in informal sessions with his teammates, especially his classmates.

“This being our senior year, we are really dedicated to football,” Coniglio said. “Just working hard.”

“He’s a special kid,” Anderson said. “He brings mental toughness to game with a heart bigger than himself.”

In other words, “Rhino Tuff.”