Stagger to swagger for Oceanside

After early-season loss, Oceanside solidifies No. 1 ranking with dominating win over Poway 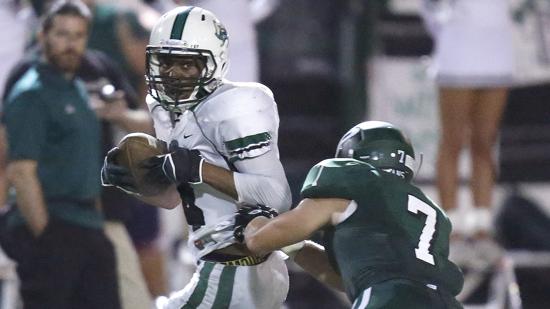 Oceanside’s Ryshaud Keegan intercepts a pass in the fourth quarter to halt Poway’s rally and preserve the Pirates’ lead over the Titans.

Against Temecula Chaparral, the Oceanside offense couldn’t establish the ground game, the passing game or even get multiple first downs on drives until the fourth quarter. And the Pirates defense, which allowed 14 points against Oakdale in the season opener, surrendered 380 yards and 33 points through three quarters.

Friday, the Pirates looked like their old selves for the second consecutive week, dictating in the trenches and dominating a formidable Division II title contender in No. 6 Poway 23-13.

“We wanted to make a statement tonight because people doubted us,” Oceanside quarterback Israel “Tofi” Paopao said. “They were questioning whether we were that powerhouse. But I think we made that statement.”

Paopao completed 20 of 27 for 295 yards and two touchdowns, including strikes of 49 and 31 to receivers Thai Cottrell and Mikah Holder. Combined, they chipped in 155 receiving yards.

Oceanside (3-1) and Poway (2-2) are relative strangers to each other, meeting for just the third time in the past 27 years. Carroll and Titans coach Damian Gonzalez, however, were well aware of what each team was capable of doing.

In the first three games of the season, the Titans had smothered their opponents. Led by cornerback Derek Babiash, who had four interceptions. Poway surrendered only one touchdown against its first three opponents. The lone score came against Scripps Ranch in the season opener.

Oceanside countered the stout, ball-hawking defense early with runs and screens. On the opening drive, Paopao encountered a loaded box filled with several soon-to-be blitzing defenders. The senior, making the 30th start of his career, signaled an audible to his receivers. Poway defenders crashed the line of scrimmage and Paopao delivered a strike to Holder, who was tucked under two offensive linemen and a screening receiver, for a 31-yard score.

“Offensively, we were explosive and really were able to attack Poway and put some points up early,” Carroll said. “Tofi had a typical Tofi performance. He did some wonderful things and made some nice throws at opportune times.”

While Oceanside marched down the field and scored on three of its first five possessions, Poway stumbled. In the first quarter, the Titans amassed only 35 total yards and trailed at the half 23-0.

“We challenged the kids at halftime to play a little smash-mouth football in the second half,” Gonzalez said.

Poway responded. A Babiash interception and a blocked punt put Poway in position to capitalize off the mistakes.

Running backs Nehemiah Gross and Lance Mudd found the end zone on runs of 41 and 3 yards to cut the deficit to 23-13. But the Titans’ comeback in the fourth quarter sputtered when Ryshaud Keegan intercepted Max Washam’s pass at the 2:45 mark.

Oceanside ran out the clock and took its first victory on the road.

Gross paced the Titans’ offense with 105 yards on 12 carries.