Beyond the end zone 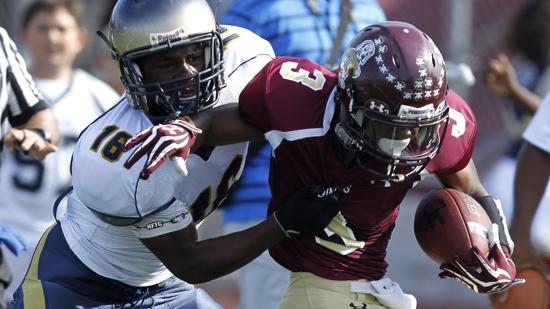 Morse's KB Barbee tries to halt Point Loma's Dirk Lacy, who rushed for 108 yards in the Pointers' win over the Tigers.

The big plays: Greg Verduga stormed through the offensive line to block a punt less than 4 minutes into the game. The block was scooped up by Jake Wambaugh, who broke two tackles and scampered into the end zone to give Point Loma a lead it would never relinquish ... Morse pulled within one on a 58-yard play-action touchdown pass from Jamal Anderson to Alfonso Wilson, who weaved through the safeties after the catch ... Point Loma’s Jamal Agnew outjumped and shook off two defenders on a Branden Martin 46-yard touchdown pass late in the second quarter.

Quotable: “I was thinking six points,” said Wambaugh, who also returned a punt block for a touchdown in 2011. “I had flashbacks to last year for just a second.”

More quotable: “I was just able to squeeze down the hole, keep outside containment,” said sophomore Jake Virissimo, who finished with a team-high 10 tackles. “Mostly it was just my team though. Everyone filling the hole and doing their job.”

Stick to the run: Point Loma came in wanting to shove the ball down Morse’s throat, and the Pointers stuck with the plan, rushing 46 times for 202 yards. Dirk Lacy shined in a crowded backfield, with 108 yards and a score on 13 rushes. Johnny Maes had a 5-yard touchdown run and Martin added a 2-yard score on a QB sneak.

Big-play defense: Morse grinded out 109 yards on 34 carries, but the Pointers came up with timely, opportune plays. Point Loma recovered two fumbles — the only turnovers of the game — and added three sacks.

“Entertaining”: The Morse cheerleaders weren’t rallying their home crowd, but the squad still took over in front of the stadium seating. The unit had a swagger during each cheer it performed, and has a total of 120 football cheers in its back pocket. Head coach Shanna Cofield summed up her impressive squad concisely and accurately: “Entertaining.”

Nice and efficient: In addition to his QB sneak, Martin gave Point Loma a steady arm behind center. The senior attempted just five passes but completed three of them. He finished with 81 yards and the deep score to Agnew. Martin has been in a QB battle with fellow senior Avery Crammer this season, and responded well to the start.

Nickname machine: Head basketball coach Chris Brisco was manning the microphone at Bennie Edens Stadium, and had no trouble keeping the crowd alive. Somewhere between a P.A. announcer and commentator, Brisco has a number of nicknames for the Pointers. Some of the notables included Johnny “Blaze” Maes, Dirk “The Freeway” Lacy, Sydney “Primetime” Rush, Zach “The Terminator” Eischen, Ja’Markus “Two-Step” Watkins and Steven “Butterbean” Arreola.

No bragging rights: Every year, Morse picks its biggest nonleague rival, and hands out stickers for the players’ helmets if they come up with the victory. The Tigers coaches chose the Pointers, but went home empty-handed.

Back on track: The win gives Point Loma an even record (2-2) after consecutive losses. Morse (1-2) lost its second straight game.