Gunfire reverberated throughout the 2600 block of 44th Street on a Saturday night in City Heights last June. 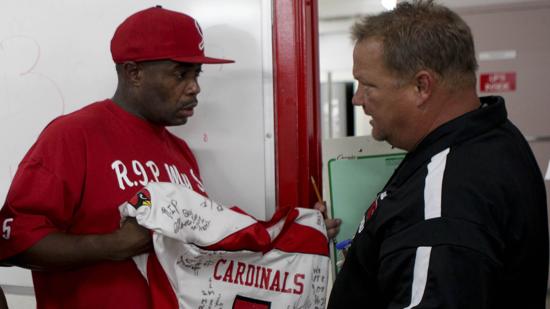 Ricky McCoy (left), father of former Hoover player Rickquese McCoy, and Cardinals coach Jerry Ralph on Monday hold the jersey of Rickquese, who was killed in a shooting.

Gunfire reverberated throughout the 2600 block of 44th Street on a Saturday night in City Heights last June.

The dark-clothed assailants, who fired as many as 16 shots, fled the scene in a silver-colored Ford Taurus minutes before authorities and paramedics arrived at 10:55 p.m.

“I couldn’t believe it,” said Dionte Whitfield, McCoy’s former Hoover High football teammate and the starting quarterback for the Cardinals this season. “I lost a great friend. One week we were talking about the upcoming season, the next he was gone.”

A second victim also died in the shooting, while a third survived.

Three months later, the memory of that horrific night of violence is helping to propel the Hoover team through a season that has begun with four straight wins under Cardinals coach Jerry Ralph.

“It was tragic what happened to Rickquese,” said Ralph, a veteran in his first year as Hoover head coach. “He meant a lot to his teammates and to the program, so we’re honoring him this season.”

The No. 5 Cardinals jersey Rickquese wore last season as a senior was retired for the year — a gesture that brought tears to the eyes of his family.

After a moment of silence before the team’s home opener against Brawley three weeks ago at Breitbard Stadium, the Hoover staff hugged Ricky McCoy, Rickquese’s father, and presented him with his son’s jersey. That jersey hangs in the home of Rickquese’s grandmother.

“It was very emotional,” said Ricky. “It means everything because I graduated from Hoover High School. I couldn’t ask for anything more.”

Rickquese, who played linebacker and running back, left a lasting impression on teammates, coaches and friends. Those who knew him remember Rickquese not by the circumstance of his death but by the things that characterized him as a person.

He was a student, a football player, a son, a brother, a cousin, a nephew, an optimist and a jokester who seriously considered enlisting in the military after high school.

“He was always there making someone laugh,” Whitfield said. “He was powerful. When Rickquese was there on the field, he was always pumping up other players, always saying how much hard work pays off.”

For Whitfield, playing against Brawley the night of the moment of silence evoked different emotions. It was bittersweet. The rematch brought up memories of the Cardinals’ game against Brawley last year, back when Rickquese was still on the team.

“We had a broken down play that game,” Whitfield said. “He caught the ball and as he approached the defensive line, he pitched the ball back to me before being tackled. I grabbed it and scored. It was like an old-school Pop Warner play. I’ll never forget that moment.”

McCoy made the honor roll as a senior but was still a few credits shy of graduating from Hoover when that opportunity was ripped from him by unknown gunmen on June 30 in front of Rickquese’s home.

That night, Rickquese’s actions spoke louder than the gunfire that exploded before him. According to Ricky, as the assailants fired, Rickquese moved in front of a woman standing nearby, protecting her from harm.

The Hoover coaching staff, McLaurin said, uses the tragedy as a learning tool for athletes on the team.

“We talked to them a little about letting these sports save your lives because if you disengage from anything organized and you get into the community, there’s a lot of bad things going out there,” McLaurin said.

“Sometimes, unfortunate things happen to good people. His heart was in the right place. He didn’t have a bad bone in his body.”

No arrests have been made in the slayings.

“We don’t say rest in peace,” Whitfield said. “We say rest beyond paradise.”