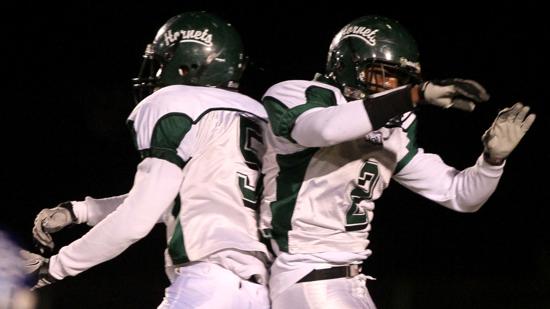 Tyrell (left) and Tyree Robinson play offense and defense for Lincoln, but they could be moved to offense or defense at Oregon.

“They hit the jackpot,” was Lincoln High basketball coach Jason Bryant’s reaction to the Robinson twins, Tyree and Tyrell, giving the University of Oregon verbal commitments in football after a visit last weekend.

The multisport seniors, who helped lead the Hornets to the 2009-10 state basketball title as freshmen, will be signing football scholarship offers in February, but they have been promised the opportunity to play basketball once football season ends, which at Oregon is usually in January.

“We wanted to keep wearing green. It’s in our blood,” said Tyrell, noting that the Ducks wear green like the Hornets. “Their football program speaks for itself. I love their style of play. This takes a lot of stress off my back.”

Tyrell and Tyree, both 6-4, 205 pounds, are two-way players for Lincoln. Both are being designated as “athletes” by Oregon, meaning if they fit best on defense they’ll play defense and if they are needed more on offense, they will play there.

Just as they have at Lincoln, they plan to play both sports, and Bryant says they are the rare kind of player who can move from the football field to the basketball court quickly.

“If anyone can do it, they can because they’re pretty special,” said Bryant. “Here at Lincoln it usually took them just one game to adjust.”

Tyree averaged 21.9 points and 5.8 rebounds last season, leading the team in three-point field goals with 101. Tyrell averaged 16.9 points and 5.9 rebounds, being the better defender. Both were first-team All-San Diego Section.

This year the two are expected to be used at both the guard positions as well as at small forward.

The twins let it be known early that they wanted to attend college as a package and were offered trips to Washington, USC and Notre Dame, in addition to Oregon.

“They have great facilities and they really want you to be there,” Tyrell said of Oregon. “We’re excited.”