The Wolf Pack is off to its first 5-0 start in 17 years, but a two-tone blue football field is bringing equal notoriety to the resurgent program. 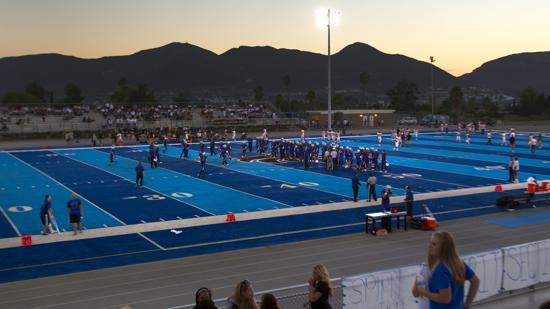 Opponents say there is no home-field advantage to West Hills’ blue turf, but the unusual surface has gained some attention for the school beyond the city limits of Santee.

SANTEE — On a recent September day the San Diego State football team arrived at West Hills High for a covert practice under the cover of broad sunlight. In less than two months the Aztecs were scheduled to travel many more miles for their first game at Boise State, where the color of the artificial turf resembles that of a deep-blue pond.

Several West Hills football players and other bystanders looked on as the Aztecs prepped for their Nov. 3 game at Bronco Stadium by running drills and simulating plays on a rough replica: the Wolf Pack’s two-tone blue football field.

“My understanding is, (San Diego State coach) Rocky Long didn’t want a bunch of people at the practice,” West Hills athletic trainer Josh Reiderer said. “It was a complete secret and nobody knew about it.”

Wolf Pack football, meanwhile, has emerged from the shadows. Last week, West Hills shut out visiting El Capitan 21-0 to move to 5-0 for the first time since 1995.

But the “Wolf Pack Den,” with its distinctive turf alternating royal blue and sky blue every five yards, has brought equal prominence to a program poised for its first winning season in five years.

“I’ve been to Texas before and I have family up in Colorado,” said senior defensive end Jordan Arnold, who leads the San Diego Section in sacks with 11. “I tell people about it and they go, ‘Oh, that’s you guys? You play on that field?’ This field’s pretty famous.”

Opponents are not as impressed. Some say the two-tone blue, the brainchild of Reiderer, has little to do with a home-field advantage.

“The truth is, there is no adjustment,” said Steele Canyon senior safety LaShawn Ware, who first played on West Hills’ sea of blue in a JV game in 2010. “You just have to go out and play football.”

Ware recalls winning that contest handily, a little more than a year after the Steele Canyon varsity walloped the Wolf Pack 48-28 in the first game played on the blue turf. On Friday, Ware and the Cougars begin Grossmont Hills League competition with a return to West Hills.

“The color scheme doesn’t really matter to me,” Steele Canyon coach Scott Longerbone said. “If it helps them bring a little publicity to their school, then good for them.”

What looks like a giant swimming pool from a distance, surrounded by brown hills and located only yards from the school’s actual outdoor pool, has accomplished just that. The blue field appears online in such lists as “10 Crazy Colorful Football Fields” and “Top 10 Ugliest Football Fields Dominated by the Color Blue.”

“When you think of West Hills, you’re gonna think of the blue turf,” said second-year Wolf Pack coach Tay Sneddon, who has overseen the turnaround of a program that won just two games in 2011. “You love it or hate it, but it’s ours.”

The vision of the field sprouted in the mind of Reiderer more than three years ago. Then the chair of the physical education department, Reiderer was brainstorming ideas after the passing of Proposition U, a bond measure for the modernization of East County schools, when he imagined combining the two-tone green he had seen in broadcasts of Oregon football games with the striking blue of Boise State.

“I just thought it would be different and people would notice and we’d get some looks and publicity out of it,” said Reiderer, a West Hills graduate.

The field made its football debut Sept. 11, 2009, with that first loss to Steele Canyon. Even now, 17 home games later, Reiderer admits there may not be a definitive advantage to playing on a blue field, though others mention the challenges of watching film of the Wolf Pack.

“Sometimes if you’re not paying attention to a certain position and just watching everything as a whole, you can get distracted,” Steele Canyon senior linebacker Jonathon Gauthier said.

At West Hills the color blue is more main event than distraction, with tales that range from the everyday to the outlandish. They include the Boise State-inspired legend that birds, mistaking the turf for water, have dived to their deaths on the field surface.

“I think there’s some fantasy to that,” Sneddon said, before adding, “but maybe there was a bird at one point.”