The senior, who's committed to play baseball at Michigan, was a backup quarterback last year. Now he's leading the San Diego Section in passing. 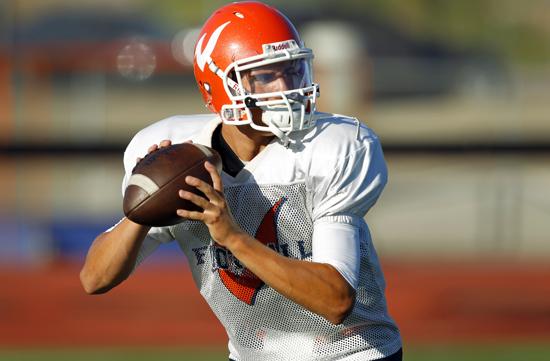 EL CAJON – Saturday morning at Valhalla High and the football players shuffle toward the parking lot, tired limbs anticipating the comfort of home. Team meetings are over. The next opponent looms in less than a week.

One player lingers behind. The quarterback formerly known as “Coach Ramsey” ventures where no other Norseman dares to go. His 6-foot-3 frame eases through a classroom doorway and into an open seat.

“Ramsey, what are you doing in here? Go home!”

Ramsey Romano grins and exits the coaches-only meeting. The senior repeats this routine every weekend.

“We gotta kick him out all the time,” offensive coordinator Collin Eardley said. “He really wants to be involved. He wants to win. He wants to take control.”

After a full season of waiting his turn, Romano leads the San Diego Section in passing, having completed 96 of 156 throws for 1,571 yards and 16 touchdowns against five interceptions. He’s led two game-winning, fourth-quarter drives – first at Morse, last week at Mount Miguel. On Friday he leads Valhalla against Helix, the defending Division II state champion.

Another aerial raid – Romano has passed for at least four touchdowns three times in five games – could further complicate the life of this year-round athlete. In August the standout shortstop committed to play baseball at Michigan. While a football offer has yet to come in, Norsemen coach Charles Bussey believes that could change with more eye-opening games.

"I think he's even maybe surprised himself," Bussey said. "He might end up with some options in football if he keeps doing what he does."

Ideally, Romano would play both sports in college. He accepted the Wolverines’ offer because he fell in love with the athletic culture and college-town environment in Ann Arbor. But, he said, he loves football just as much as baseball.

“I really wanted to take care of it as far as committing,” he said. “I had to get myself ready for the season and I couldn’t let my team down not being ready.”

At the moment Romano is savoring the starting quarterback position, a role filled last year by then-senior Frank Foster, who claimed second-team all-CIF honors. Romano, meanwhile, backed up another quarterback for the first time in his career.

“It was a new experience,” Romano said, “and, in my opinion, for life perspective it was a good experience.”

How’s this for perspective? Romano attempted just 17 passes last season. In a shootout loss to El Toro last month he threw 46 times. On one play, flushed out of the pocket, he tucked the ball and dashed 88 yards for a touchdown.

“He’s always been a very good quarterback,” said father Gary, a former baseball player at Crawford High. “I expected him to be one of the county leaders, but I didn’t expect him to be where he is right now.”

In Valhalla’s spread offense Ramsey Romano makes dozens of reads and throws. His right arm, honed on the baseball diamond, can fit a pass into a narrow window or fling it close to 60 yards.

“We throw the long ball, we throw the intermediate routes and crossing routes and deep outs,” Bussey said, “things like that that some spread teams don’t.”

Romano’s childhood, nurtured by a pair of athletic parents – mother Kim played softball and basketball at Helix – prepared him for this stage. At age 9 Romano made a wall-scaling catch in front of more than 4,000 spectators at a baseball tournament in New York.

“A bigger crowd, an intense situation, he tends to excel,” Gary Romano said. “That kind of put the writing on the wall that there was something unique about him.”

Years later Ramsey Romano was a freshman quarterback at Valhalla doling out suggestions and orders to teammates, most of them at positions he had never played. Sometimes his confidence rubbed people the wrong way. His nickname became “Coach Ramsey.”

These days Romano has shed the Coach Ramsey label. He’s mastering the part of cool, collected quarterback, leaving the real instruction to the experts.

“The coaches got it covered,” said Romano, who still can’t help crashing their meetings or occasionally reverting to his headstrong, freshman-year ways.

On a recent weekend Romano and Valhalla senior receiver Ben Howard, a pass-catch duo for the last seven years, trekked to Howard’s beach house in Newport Beach, where the waves break on the shore more fiercely than they do in San Diego.

“The first time he went in the water he didn’t let me explain,” said Howard, who tops the section with seven touchdown receptions. “He just went in there and got pummeled by the waves. He’s an excellent quarterback but not the best bodysurfer.”