Mavericks’ Quessenberry ranked No. 2 in nation at center position 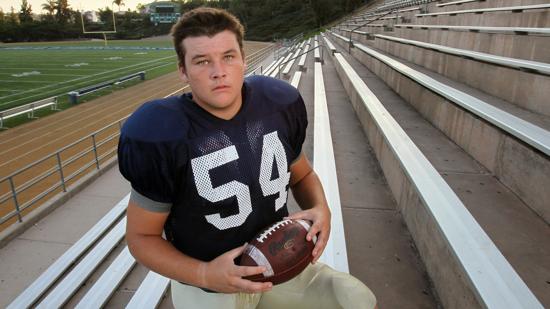 Scott Quessenberry plays left tackle for the Mavericks, ranked No. 2 in the section.

Scott Quessenberry will wear “True Blue and Gold” on Saturdays next year.

The La Costa Canyon High senior offensive lineman, who ranks 189th overall in the ESPN 300 and No. 2 at center, verbally committed to UCLA on Friday night after the Mavericks defeated El Camino 19-0.

Quessenberry (6-4, 276) received as many as 20 offers from schools in the Pac-12, Big Ten and SEC but ultimately picked the Bruins over a list of finalists that included San Diego State and Cal. He won’t be able to sign a letter of intent until national signing day in February.

Though Quessenberry plays left tackle in high school, he projects to play center for the Bruins, who have verbal commitments from six other offensive linemen, according to

On Jan. 4, Quessenberry will suit up in the Under Armour All-American game at Tropicana Field in St. Petersburg, Fla.

When the clock struck zero, a sea of Maroon and Silver poured onto the field, engulfing the Rancho Buena Vista football team.

No, the Longhorns didn’t win a league title Friday night, nor did they win a San Diego Section championship. But to their fans, and some of the Longhorns players, it sure felt like it.

“Some of our kids had never beaten Vista before, never held the rivalry trophy,” Rancho Buena Vista coach Paul Gomes said of his team’s 36-0 victory over crosstown rival Vista. “It was huge. Our fans went crazy.”

That trophy, which is awarded annually to the winner of the matchup, has not changed homes in years — five to be exact.

“It’s a great win for us, a big step in the right direction,” Gomes said. “They get to enjoy it for the day and then we move forward, on to our next opponent.”

Rancho Buena Vista did it all without Daviante Sayles, the team’s star running back, who was sidelined with a bruised knee he suffered last week against El Camino. Sayles was the section’s leading rusher, accumulating 1,164 yards and 15 touchdowns on 151 carries before being eclipsed this week by Imperial’s Royce Freeman.

Fullback Niko Cortez filled the shoes of the injured Sayles and rose to the challenge. He finished with 158 rushing yards and two touchdowns behind an offensive line that features six players over 260 pounds and four 6-footers.

The Longhorns improved to 3-3 on the season, three more victories than they had all of last year.

“Guys are learning each week and we continue to play better,” Gomes said. “They’re buying into the program, what we are doing, and it is starting to show. They believe in themselves.”

Back at the helm

Three weeks ago, the senior Cathedral Catholic quarterback broke a bone in his right wrist during a victory against then No.?1 ranked Helix. Bogart made his return on Friday, leading the Dons to a 52-10 victory over Eastern League opponent Scripps Ranch. He completed 6-of-9 attempts for 146 and a touchdown.

During Bogart’s absence, Cathedral Catholic went 1-1 under Clayton Dale. In the last two weeks, Dale has thrown for 202 yards with a pair of touchdowns, both coming against Morse.

The Dons and Bogart received plenty of help from the running game. Together, the quad of running backs Tony Johnson, Theo Hardson, Chris Moliga and Josh Gizzi compiled 327 rushing yards and five touchdowns and averaged 9.1 yards per attempt.