Pirates’ Gulley uses his speed at linebacker, running back 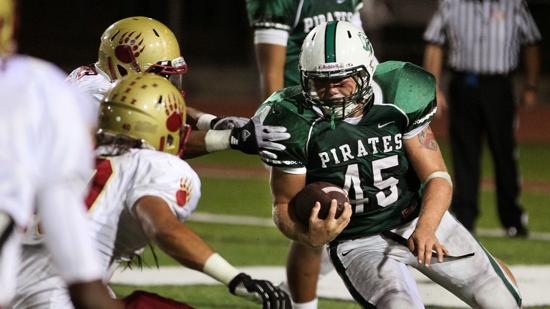 Oceanside senior William Gulley is best known for his play at middle linebacker, but he also carries the ball for the No. 1-ranked Pirates, who host Ramona in a nonleague game at 7 p.m. Friday.

William Gulley is far from a dog.

But in the eyes of college recruiters, the son of former Oceanside All-San Diego Section linebacker Billy Gulley is undersized at 5-feet-11, 220 pounds.

“He’s very intense, and he knows the game.

“He calls our defensive signals, sets the tone for the defense.

Gulley has been setting the tone for the 6-1 and No. 1-ranked Pirates since he was a sophomore.

And while he doesn’t want to get too far ahead of himself, insisting that winning a San Diego Section Division II title is his and the team’s top priority, he can’t help thinking about the future.

“Everyone says my size works against me,” Gulley said. “I know I’m not the tallest guy, but I can run (clocking a speedy 4.6 in the 40). I love to hit, I love the mental side of the game, and I think I have the skills to move to free safety if that’s where a college wants me.”

While he has yet to receive a college offer, Gulley has heard from Nevada, Northern Arizona, Western New Mexico, Cal Poly San Luis Obispo and has gotten to know Hawaii defensive coordinator Thom Kaumeyer, who played at San Dieguito High, Palomar College, Oregon and in the NFL.

Defense, however, isn’t all Gulley does.

Last year, the Pirates were short on running backs, so Carroll asked Gulley to play on both sides of the ball.

And the junior responded with 583 yards and 12 touchdowns.

His carries have been limited this season by a bruised heel, suffered in a preseason scrimmage against Torrey Pines.

But as Gulley heals and gets back to 100 percent health, Carroll said Gulley’s offensive load will increase.

“I knew he had defensive skills,” Carroll said. “And I thought he could be a power running back.

“But he has moves. He can make defenders miss. And he has the speed to go the distance.”

Defense, however, “is where my heart is,” Gulley said. “It’s where my dad played, so I guess you can say I’m a natural defender.

“I always felt I could run the ball, though. And I’m glad I’ve gotten the opportunity.

“I’m kind of a frantic runner. I go as hard as I can until someone brings me to the ground.”

While football is Gulley’s only varsity sport, he credits lacrosse for improving his football skill level.

“Football is my passion, no question,” Gulley said. “But I’ve played other sports.

“Lacrosse is something I’ve played since the sixth grade. And I think I’m just as good in lacrosse and football.

“We only have a club lacrosse team at Oceanside, so no one is going to offer me a lacrosse scholarship. But lacrosse has helped me in football.”

Gulley said the cutting and quick movements in lacrosse have helped him on offense in football.

And playing on your man’s hip in lacrosse has helped his defensive skills.

“Football is what’s going to take me somewhere, I know that,” Gulley said.

After an early-year stumble, he says he has a 2.8 grade-point average, “and it will go up as I start doing things right again,” he said.

He has a good SAT score, but plans to take it again.

“I’m on track to be fully qualified,” Gulley said. “I want to finish this year strong.

“I want to have all the classroom stuff in order, so when a college offers, I’ll be ready.

“Mostly, though, I want another championship ring.

“I got one as a sophomore, then Helix took it to us in the championship game last year.

“They were just the better team.”

So there is a high level of expectation on the Oceanside campus.

“I was a ballboy as a kid. I used to dream of playing for the Pirates.

“Now it’s here, and it’s almost over. Everything I do revolves around football.

“We’re all committed to winning another CIF title, and if we get to the state playoffs, all the better.

“We’re focused on winning our section, getting that championship ring. Anything more would be a bonus.”