Football coach makes her mark in a man’s world

Renethia Hall came to expect the puzzled stares, the biting remarks, the lack of acknowledgment in handshake lines. 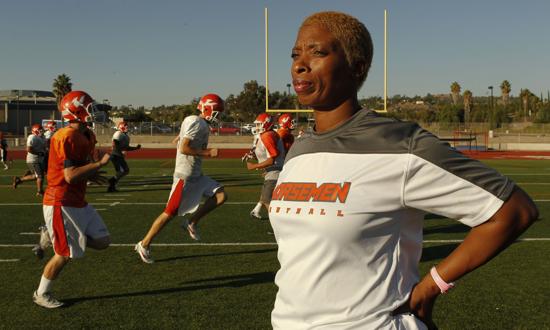 Any player who breaks the rules established by Valhalla assistant football coach Renethia Hall must do push-ups.

EL CAJON — Renethia Hall came to expect the puzzled stares, the biting remarks, the lack of acknowledgment in handshake lines.

Here she was, a woman in a man’s sport — and a head coach at that. From 2007 to 2009, San Diego’s Marine Corps Recruit Depot football team was hers. All three seasons culminated in trips to the playoffs.

“You learned how to close people out, especially the taunting,” said Hall, now an assistant football coach at Valhalla High. “‘She’s a female or she’s a girl.’ I had to turn around and say, ‘No, I’m not a girl. I’m a woman.’”

During her four years in the service, Hall learned to feed hundreds of soldiers at a time. She learned to fire a rifle. Most important, she learned discipline and confidence.

Nine years ago, when then-Valhalla coach Dave Hostetler spotted Hall working out with her oldest son and asked her to join the team as a freshman defensive line coach, Hall didn’t hesitate.

Several years earlier, her son had broken his arm playing football. Hall decided it was time to become personally involved with his coaching. She volunteered with the local Pop Warner team. She read books on coaching. She attended coaching clinics, some as far away as Los Angeles.

“I went everywhere just to learn the game,” said Hall, who has raised six sons, four of whom have played football at Valhalla. The youngest, Nehemiah Brown, is currently a senior running back and defensive back for the Norsemen.

Nearly two decades after she began her coaching education, Hall joined the Valhalla varsity this season to oversee the team’s conditioning and running backs. Norsemen second-year head coach Charles Bussey gave her the nod after watching Hall, an assistant with the school track team, develop some of the fastest sprinters in the county.

Her military background didn’t hurt, either.

“If you ask the boys who they’re most scared of on this field, it’s gonna be her, hands down,” Bussey said. “She’s got these boys a little bit afraid of her but definitely respectful of her.”

“Coach Hall” enforces a strict set of rules at practice. Say “yeah” instead of “yes” to her and you’ll be doing 25 push-ups. Curse in front of her? Drop down for a cool 150.

“We,” Bussey said, “probably have the most conditioned running backs in the league.”

Senior quarterback Ramsey Romano estimated he has cranked out close to 1,500 push-ups in practices over his career at Valhalla.

“She’s a very, very influential person, arguably the most influential coach I’ve ever had,” Romano said. “She expects amazing discipline out of us and the way she coaches is unlike anyone else.

“After you get to know her, you’ll think completely different about a woman coaching football.”

Valhalla’s running backs have yet to lose a fumble in nine games this fall. As a team, the Norsemen (6-3) are averaging 7.7 yards per carry, urged on by Hall’s watchful eye and the occasional earful.

“I get to hear her at home and on the field,” said a smiling Brown, who inherited his 4.4 speed from his mother, a standout during her days on the San Diego High track team.

Last year, when Hall was instructing the freshman defensive line, she stepped into the circle against a 200-pound player and lifted him into the air before throwing him to the turf.

“I don’t just stand on the sideline and get water, like most people think I do,” said Hall, who heads to practice every day after work at the MCRD mess hall. “They can say whatever they want to, because I have heard it all. I have heard everything.”

The reward for Hall’s time, which she has freely volunteered to Valhalla football for the last nine years, manifests itself at every practice. Some of the Norsemen’s freshman coaches played for Hall when they were themselves freshmen.

“Football is about life skills, problem-solving, motivating, confidence,” Hall said. “I enjoy it plus it keeps me young. I enjoy teaching, not just football.”