Army-Navy seniors on a football mission

Classmates stick together in pursuit of goal to become unbeaten S.D. Section champs. 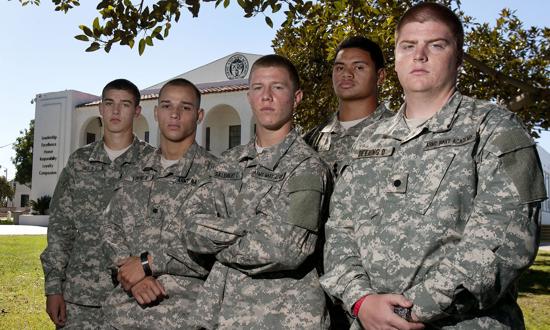 Paopao is the quarterback of top-ranked Oceanside High, and Naotaola’s family lives in the Oceanside district.

But Naotaola, a 6-foot-1, 250-pound man-child of a running back/defensive tackle, is a man of his word.

So he’s back at tiny Army-Navy Academy in Carlsbad for his senior football season.

“There is a group of us that came in here as freshmen,” Naotaola said. “And we planned since we were freshmen to stick together, come back and have a big senior year.”

Since Army-Navy is a boarding school with tuition as high as $33,000, many promises are made by players, but few are kept.

Finances, family situations, academic issues and adjustments to a military way of life often drain Army-Navy of its best athletes.

“It can be tough here,” said Naotaola, a nonresident student. “But it can be rewarding, too.

“Kids say they’ll come back, but they seldom do. This group is different. Guys have made a lot of sacrifices to play our last year together. And it shows.

“Plus, the education here is great. We have a teacher-to-student ratio of 15-to-1. Teachers will help students at night on their own time.”

The Warriors were a powerhouse in the ’70s, winning two San Diego Section championships and tying for another in an eight-year span.

School records date back to 1964, and there hasn’t been an unbeaten football team in that time.

This season, the Warriors are 9-0 heading into Friday night’s Pacific League title showdown with a very good Tri-City Christian team at Carlsbad High.

Tri-City Christian doesn’t have a home field. And while the Army-Navy campus sits on a multimillion dollar property on Coast Highway, overlooking the beach, Army-Navy’s field is a multiuse piece of grass, wedged between the street and the railroad tracks, just across from the campus.

There are no lights, very little parking, a press box built for three and seating for maybe 100 fans.

The school gym looks like something out of the movie “Hoosiers” with four rows of bleachers and a stage at one end.

“We study hard, we work hard, and we play the game hard.”

Deering is from Arizona, Harlib from Nevada, and Luque, the team’s leading rusher, is from Carlsbad.

“I had opportunities to play for Carlsbad High, and my friends there tried to convince me to change schools,” Luque said.

“But I made the decision to stay here. We depend on one another here. And I couldn’t let these guys down.”

The immediate goal for the Warriors is the Tri-City game.

The long-term goal is the playoffs and a section championship.

Army-Navy’s last San Diego Section title was 1979. The school’s last appearance in the finals was 1990.

Despite this breakout season, the Warriors are getting very little love.

They’re among just 39 unbeaten teams in the state and one of only two, along with 9-0 Olympian, in San Diego.

Still, Army-Navy isn’t among the top 10 teams in the state Division IV bowl rankings, and might not be better than a sixth seed in the San Diego Section Division V playoffs.

Two forfeit wins — one against Calvin Christian and another against San Diego Jewish — have hurt the Warriors in the rankings.

“I’ve never seen a team get two forfeits in a season,” said veteran coach Frank Henry, who is in his second season as coach at Army-Navy after stints at San Diego City College, Laguna Beach High, Horizon, H-Town and San Diego Calvary Christian.

“It’s devastating not to play.

“Joey and Sam should be All-CIF players, but they won’t have the stats to compare to the big schools because of the forfeits. There isn’t a school in San Diego that wouldn’t start Joey Naotaola at fullback and nose guard.”

San Diego State, Oregon and Utah State are among the colleges recruiting Naotaola.

“People are starting to pay attention,” Harlib said. “The cadets on campus have bought in. There is an excitement, a buzz.

“The cadets can go home for the weekend, but a lot choose to stay to watch us play.”

With all the seniors, a sophomore has taken over at quarterback. Chris Salisbury comes to Army-Navy from Rancho Santa Margarita.

And while Deering says “we’re really a bully offense,” the 5-10, 170-pound Salisbury has thrown for 1,102 yards with 11 TDs and only one interception.

“I grew up a quarterback,” said Salisbury. “I’ve always been a leader, knew some of the guys here, and knew I’d fit in.

“But there are a lot of leaders on this campus.”

Henry said Salisbury was the team’s “missing link” bringing athleticism, leadership and knowledge to the position.

He’s also one of the team’s captains.

“The biggest problem here was creating a culture of winning,” Henry said. “There was no system in place. There was no spring ball, no summer passing league. Kids would come and go. There was no commitment.

“This group is committed. We started a bigger-stronger-faster program, a team concept, and the team has bought in.

“We lift weights three days a week. And it shows. We’re so much stronger.

“These kids are having fun. Winning, camaraderie will do that.”