Brandon Andrade has gone from third-string quarterback to record-setting passer. 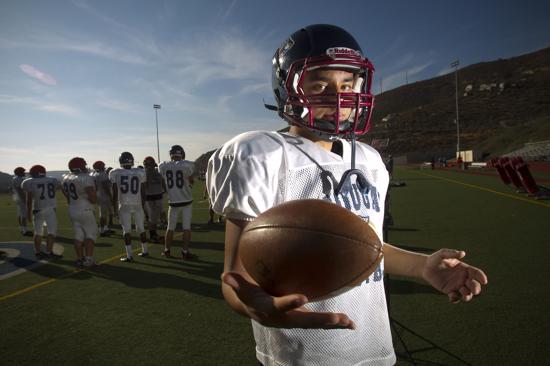 SPRING VALLEY — Four weeks ago, on a Friday night in Santee, Brandon Andrade passed for four touchdowns and ran for another in Steele Canyon’s 36-10 victory over previously undefeated West Hills. As he walked off the field, a camera crew approached the senior quarterback and star of the game.

It was an invitation to appear on the “Prep Pigskin Report,” KUSI Channel 9/51’s wildly popular football show. Each Friday, the 10:30 p.m. broadcast draws thousands of eyes, including those of high school players around San Diego County. The lucky ones take to Twitter to boast about postgame cameos.

So when Andrade (ahn-DRAH-dee) politely declined the interview request and directed the camera toward a trio of teammates standing nearby, the “PPR” crew discovered what those teammates already knew.

“He’s an extremely chill guy,” receiver Tommy Tyler said this week at practice. “He doesn’t need everyone to know he’s the starting quarterback.”

Added Steele Canyon coach Scott Longerbone: “He’s not a spotlight guy at all.”

Maybe it's because Andrade, at 5 feet 10 inches, has been underestimated for much of his football career. Or maybe it’s because, after spending his sophomore year at another school, Andrade had to work his way from third-string junior to breakout, record-setting senior.

Ask Andrade, and he’ll tell you plenty of work remains. The Cougars, whose 3-5-1 record masks one of the county’s toughest schedules, close out the regular season tonight at second-ranked Helix (7-1). A competitive showing would bolster Steele Canyon's case for a spot in the Division II playoffs.

Beyond this season? Andrade, who already has established school milestones this fall passing for 2,214 yards and 23 touchdowns, spoke without hesitation.

That vision was put on hold two years ago when Andrade left Steele Canyon, a school with an enrollment of more than 2,000, to attend San Diego Academy, a private institution with a K-12 student body of less than 400.

“I kinda went downhill and made a couple bad decisions,” Andrade said. “I needed a restart, kinda find myself again.”

When Andrade returned to Steele Canyon for his junior year, he found himself at a disadvantage. Not only had he essentially taken a yearlong break from his favorite sport — San Diego Academy offered only flag football — he had to settle for a jersey number unbefitting a quarterback.

By season’s end, Andrade, who now dons No. 7, was wearing No. 16. In the sixth game of the year, he saw his first substantial varsity action, throwing two touchdown passes in a win against Granite Hills and convincing the coaching staff to start him the rest of the way. He finished 2011 with 951 yards and eight scores through the air.

During the offseason, longtime defensive coordinator Longerbone was selected head coach after the retirement of Ron Boehmke, the program’s leader during its first 12 years in existence. Longerbone brought in former Santana offensive coordinator Mark Tipton, who introduced a spread offense, the first of its kind at Steele Canyon.

“His reads are so fast that he knows where he’s gonna throw it,” Longerbone said. “I don’t think his height affects him at all.”

Andrade, a varsity golfer who can launch 300-yard drives, has heard doubts about his frame since he began playing quarterback for his Pop Warner team. His answers to those questions: an advanced knowledge of the game — he often makes his own calls at the line — along with a quiet toughness that has earned the admiration of his teammates.

“He takes the hit to let the receiver make the catch,” said wideout Lawrence Dickens.

“All his passes are really good,” marveled receiver Brandon Howard, who fondly remembers a fifth-grade “scuffle” with Andrade over a girl. Following a shared trip to the principal’s office, the two became, and have remained, friends.

Said Longerbone: "He's got something about him where you just wanna do good things for him. I see it in the receivers. When they drop a ball in a game, they're not just bummed that they dropped the ball. They'll come out and say, Sorry, Brandon."

For his part, the soft-spoken Andrade admits his success this season has come as a welcome surprise.

“I would love to play this for the rest of my life,” said Andrade, who has drawn interest from several Division III schools. “I eat football, go throughout the day thinking about football, sleep football.

“On the field, that’s where I’m comfortable. Once I put the helmet on, I’m a totally different animal.”