Mar Vista rushes to another title

Mar Vista head coach Brian Hay had the speech ready. He was set to lay the hammer down and tell his team how their slow start was blowing their chance to repeat as South Bay champions. 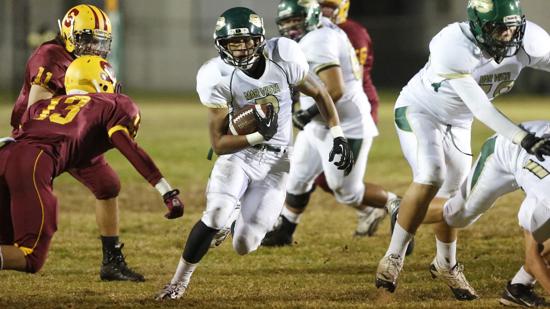 IMPERIAL BEACH — Mar Vista head coach Brian Hay had the speech ready. He was set to lay the hammer down and tell his team how their slow start was blowing their chance to repeat as Metro South Bay League champions.

His Mariners obviously didn’t want to hear it.

Instead, they all shared in the party, running away with a 63-14 victory over visiting San Diego Southwest to claim the league title and hopes of a top four seed in the Division IV playoffs.

“I’m glad I didn’t need it,” Hay said of the speech. “I thought we might come out flat, but we didn’t. I guess that’s what happens with a rivalry game.”

The fun commenced early and the points came often, with seven different players scoring TDs in the first half.

Leading the way in the opening half was Jimmie Hill. The junior broke loose for a game-high 164 yards rushing, including a TD run of 49 yards.

“We came out ready with high intensity,” said Hill, who didn’t play in the second half. “We took it to them in the first half.”

The first damage came on the fourth play of the game, when junior Alejandro Akerlundh raced 40 yards untouched on a counter play.

“(Hill) gave me the handoff and all I saw was green grass,” Akerlundh said. “My line did a great job.”

Akerlundh wasn’t done there. He came back with a fumble recovery four plays later, setting up a Kenny Nieves 1-yard score.

Also chipping in with first-half scores were quarterback Landon Clark on a 15-yard keeper, Bennie Smith on a 5-yard run and Beto Garcia on a 6-yard pass from Clark.