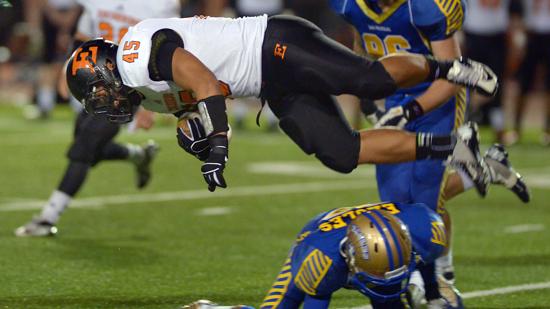 Escondido running back Louie Jacobs keeps possession despite a hit from San Pasqual’s Sammy Flores that spun Jacobs around.

And the crosstown rivalry is just as heated today as it was when the schools first played in 1972.

Friday night, in the 43rd renewal of the rivalry, Escondido capitalized on two long first-half touchdowns, then hung on to upset San Pasqual for a pad-popping 20-14 win Friday in an Avocado East League game.

The win boosts the playoff hopes for Escondido, which improves to 5-5 overall and 1-3 in the league.

“This should put us in,” said Escondido coach Steve Bridges. “At least now, we don’t have to go down to the seeding meeting and beg for a spot.”

The section seeding meeting is this morning. The loss crushes hopes of a top-four seed in the Division I playoffs for San Pasqual (6-4, 2-2).

Escondido scored on the game’s opening series as quarterback Mitch Bartram broke loose and sped 49 yards to a score.

Late in the second quarter, Bartram hit a wide-open JC Hernandez with a 60-yard scoring strike to give the Cougars a 13-0 halftime lead. And it could have been more.

Escondido missed a pair of field goals ... one wide left from 27 yards, another from 33 that hit the left upright.

Plus, Brett Barlow of the Cougars had an interception, but fumbled it back to the Eagles after a nice return.

San Pasqual opened the second half with a 15-play drive that ate up more than eight minutes of the third quarter. The drive, however, stalled at the Escondido 18 and a 35-yard field goal attempt sailed wide right.

Escondido appeared to put the game away early in the fourth quarter when Bartram lofted a 24-yard scoring strike to Hernandez in the corner of the end zone to make it 20-0.

But San Pasqual scored twice in a span of 90 seconds as Spencer Csonka and Grant Huffman connected on a 32-yard scoring pass.

And after an Escondido punt, San Pasqual was driving again. But Brady Anderson intercepted a tipped pass, giving Escondido the ball with 2:39 to play.

Louie Jacobs, subbing for an injured Marcus Taylor, had a pair of first down runs to give Escondido the game.

“This means everything,” said Bartram. “To make the playoffs and do it by beating our archrival means a lot.

“We knew our season was on the line, and we played like it.”

Bartram had 103 rushing yards and Jacobs finished with 167.