Olympian High’s Gil Warren is considered a genius in the South County football community.His most astute move may have been in 1969 when he invited an aspiring young defensive coach out of San Diego State named Reldon "Bing" Dawson to join his staff. 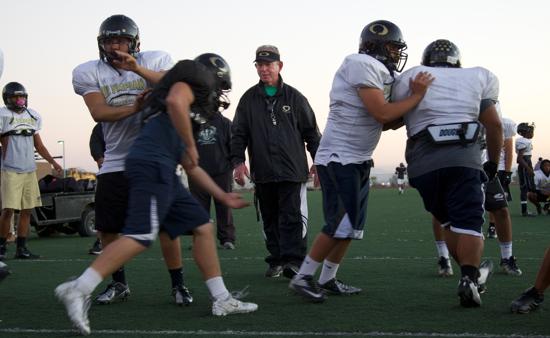 His most astute move may have been in 1969 when he invited an aspiring young defensive coach out of San Diego State named Reldon “Bing” Dawson to join his staff at Castle Park – and, for a while, even more.

“I actually lived with him way back when,” said Dawson, who joined Warren after a year as a graduate assistant at SDSU and another as an assistant at Marian Catholic. “I lived with him, his first wife and I even shared the bedroom with their first son.”

While they no longer share any living arrangements, they continue to share success. Olympian just concluded a 10-0 regular season, earning its second-straight Mesa League title and the top seed in the Division III playoffs.

Dawson’s defense held opponents to under two touchdowns a game and 12 points under their season’s average.

“He’s invaluable,” Warren said. “When we go out on defense I just turn the game over to him.”

After graduating from SDSU in 1967, where he played linebacker/fullback, Dawson had the good fortune to hook on as graduate assistant for the Aztecs. He witnessed firsthand the coaching skills of Don Coryell, John Madden and Claude Gilbert.

“The guy who really had an impression on me was Gilbert,” Dawson admitted. “It was with him when I really learned the fundamentals of defense.”

Dawson’s first stint at Castle Park lasted from 1969-1983, including two years as head coach, a job not for him.

“It seems you do nothing but handle problems and not get to coach,” he said.

He moved on to a highly successful stint at Southwestern College, again with Warren.

“It seemed year-in and year-out we were playing in a bowl game,” Dawson said. “You can recruit there and apparently I was a pretty good recruiter.”

A trait of Dawson’s defense is conditioning, both physically and mentally.

In a 2004 Union-Tribune article, then Chargers linebacker Zeke Moreno, who had been a standout at Castle Park, revealed he appreciated Dawson’s value when he first attended USC in 1997.

“The other linebackers coming in barely knew how to read offenses” Moreno said. “Coach Dawson had been teaching us how to read the backs through the guards since we started playing. I wasn’t the fastest or the strongest linebacker, but I’d been taught how to react and read in a split second. I was taught to go on instinct.”

Dawson’s tireless work ethic doesn’t stop on the gridiron. It’s in his blood.

“When I go on vacation I almost immediately look for things to do,” he admitted. “I’m not a good sitter.”

Another passion since his college days is rugby. What started as a group of hell-raising, beer-guzzling ex-football players migrated into the Old Mission Bay Athletic Club (OMBAC) Rugby Team.

In 1967 a mass was removed from behind his lung, ending his playing days. It opened up a new avenue for him – coaching rugby.

In 2007 he again hooked up with Warren, joining Olympian in its first year of varsity football and as a teacher of Advanced Placement history.

“I just knew it was time to move on,” he said of leaving after 37 years as a Trojan. “I left some very good friends at Castle Park.”

After a slow start, the Olympian program took off. Over the last four years the Eagles have averaged 10 wins a season. Last year they made the Division III final at Qualcomm, falling to Cathedral Catholic.

Dawson has no timetable to call it quits.

“I would die the first year I retired,” he joked.