It was a little déjà vu for the Westview High football team. 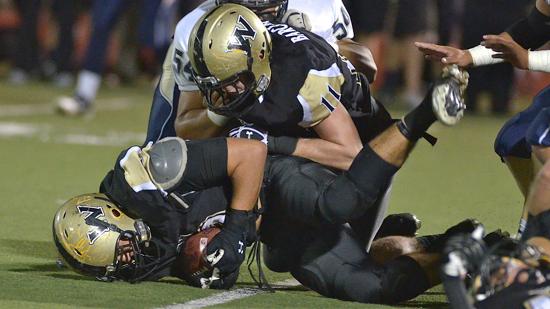 Westview’s Josh Skolnick recovers the ball after Bonita Vista quarterback Marcos Kaska fumbles from a hit by Aaron Nelson. Skolnick, also a fullback, went on to score a 1-yard touchdown run late in the first period.

It was a little déjà vu for the Westview High football team.

The Wolverines opened the 2012 postseason the same way they did in 2011, and the result was almost the same.

After a 21-point first quarter, Westview was never threatened Friday night in posting a 35-7 victory over Bonita Vista in the first round of the San Diego Section Division II playoffs at home.

Though it wasn’t as decisive a win as last year when Westview pounded Bonita Vista 48-0 in the opening round, the Wolverines, now 8-3 this season, advance to Friday’s quarterfinals at No. 3 seed Poway (8-2).

“It’s hard to be disappointed with any playoff win,” Westview coach Mike Woodward said. “We kind of knew what they’d do because we saw them last year, but we tried not to focus on that.

“Now, next week will be different. Poway is a really tough team.”

The Wolverines, who finished the regular by losing two of their last three games, opened the game as if they were intent on ending it quickly, scoring on their first three drives for a 21-0 lead.

Westview was back in the end zone on the next possession, which ended with Eric Kremp’s 31-yard run with 4:32 to go in the same quarter.

Once the rain started as the quarter ended, the Wolverines collected just one first down in the second quarter.

“We got the momentum early and then backed off the throttle for some reason,” said Williams, who caught six passes for 111 yards. “We went in at halftime thinking we should have had more points.

“Against Poway we’ll have top play our best game of the year. If we do, I definitely think we can get a win.”