Hilltop High had reversed a four-game losing streak and won three in a row, but when the team trudged off the field at halftime at Southwest High last month, it had a minuscule 2-0 lead. 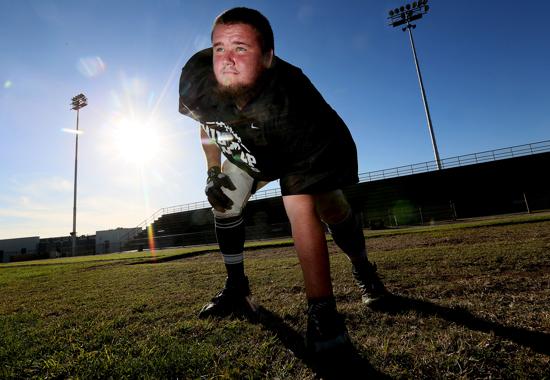 Hilltop High captain Cody Baynes is 6-foot-3 and weights 285 pounds. When he speaks to teammates, they listen.

Hilltop High had reversed a four-game losing streak and won three in a row, but when the team trudged off the field at halftime at Southwest High last month, it had a minuscule 2-0 lead.

Coach Cody Roelof was thinking about what he was going to say as he entered the locker room, but he found Andy Baynes, his 6-foot-3, 285-pound left tackle, already addressing the team.

“I listened for a couple of minutes and decided all the coaches should leave the room,” said Roelof, knowing there was nothing stronger he could say than what he was hearing his usually soft-spoken senior captain tell the other players.

“I gave him the time and when the team took the field for the second half, you could tell they were focused and ready.”

Baynes said he wasn’t Vince Lombardi or Knute Rockne, just a player letting the others know that if they didn’t get their heads in the game starting in second half against Southwest, the result could be a second straight year of missing the playoffs.

“I told them we only had three games left and that a loss would be devastating,” said Baynes who helped the Lancers roll to victories in two of those games before beating Orange Glen 35-28 in overtime of the section Division II playoff opener.

The reward: a chance for Hilltop to play at No. 1 seed and state-ranked Oceanside Friday night.

“You could tell they weren’t focused before the game and I thought it was time to step up as the captain,” Baynes said. “I just told them to put out everything they had.”

Roelof was only slightly surprised that Baynes stepped forward. After transferring to Hilltop from Mater Dei Catholic as a junior, Baynes had made an immediate impression on the third-year coach.

It wasn’t just his size, it was his attitude and work ethic.

“I wish I had a team of Andy Bayneses,” Roelof said. “He has a heart the size of the world. He is playing with a strained ACL, MCL and sore shoulder, but he plays every down. He’s a true, true workhorse.

“What I know is if we absolutely have to have 4, 5, 6 yards, we’ll go behind him and there’s a good chance we’ll get it. He’s both a good run and a good pass blocker.”

Baynes says he loves pass blocking but that run blocking is fun, too. Being the left tackle, he knows he has to protect the blind side of the quarterback as well as open holes when asked to do so for the running backs.

“I do my job but when we score, I celebrate with whoever scores because we’re all a part of that TD,” said Baynes, who is taking extra classes at adult school to raise his 2.6 GPA. He has gotten inquiries from several colleges but no offers yet.

“Andy is one the nicest kids you’ll ever meet but he’s one of those guys who knows when to turn on the switch,” Roelof said. “He’ll play somewhere because he really wants it.”

As for facing the Pirates, Baynes looks at it as an opportunity that he relishes.

“It’s a fun challenge, I can’t wait to go out and hit,” he said. “We know they’re big and that quarterback (Tofi Paopao) is very good, but I look at like we have nothing to lose and tons to gain.”