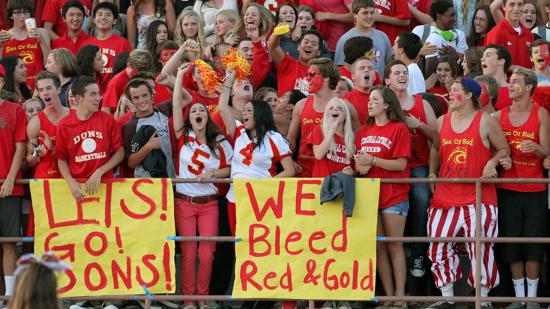 The football season is over for Cathedral Catholic and the Dons' spirited fans after the team had to forfeit games for using an ineligible player.

The Dons, who were seeded No. 2 in Division III and were 8-2 this season, were forced to forfeit all 10 games the ineligible player participated in.

“The rule is clear,” said San Diego Section Commissioner Jerry Schniepp. “The player in question participated in all 10 games. So the school must forfeit those games.

“Section rules say any football team with more than three forfeits in a season can’t participate in the playoffs.

“Cathedral Catholic appealed the original decision, and after a hearing the decision was upheld.”

The Dons, who self-reported the violation, were to host No. 7-seeded Serra (8-3) Friday in the quarterfinals. Instead, Serra will advance and play the winner of the West Hills-Ramona game in the semifinals.

Cathedral Catholic beat Serra 55-7 in the final game of the regular season.

“The kids are completely devastated,” Cathedral Catholic head football coach Sean Doyle said. “But afterward, they said we did the right thing.

“They understood, the right thing was done.”

Doyle didn’t want to elaborate on the details but said the player in question transferred to Cathedral Catholic and had never played football before arriving at school.

“Dave Smola, our athletic director, is beyond diligent,” Doyle said. “This was a clerical error. Had a piece of paperwork been stamped, we wouldn’t be having this conversation.

“I know Jerry Schniepp inherited these rules, but I wish they’d look at each case on its own merit, look at the severity of the infraction because all this does is hurt all the kids on the team.

“That being said, we’re adamant about doing things right and abiding by the rules.”Cathedral Catholic’s only losses this season were to Torrey Pines (24-17), which is in the quarterfinals of the Division I playoffs, and Vista Murrieta, which is 10-0.

Vista Murrieta is ranked No. 2 in Division I in the South in the bowl rankings by CalHi Sports.

Oceanside is ranked No. 1 in the South in Division II.

The Dons beat Helix (16-9), the No. 2 seed in Division II in the San Diego Section. It is the only loss for Helix this season.

“We had a great season and felt we could have made a run at a county championship and maybe a bowl game,” Doyle said.

Cathedral Catholic is ranked No. 8 in the South Division II bowl rankings by Cal-Hi.“I really respect Cathedral Catholic for self-reporting this,” Schniepp said. “I know they were very disappointed, but they understood the ruling.

“We feel we did the right thing, but it’s very unfortunate.”