Calkins: Madison football coach has quite the bio

Madison High's Rick Jackson does something by day that's a little different from your typical high school football coach. 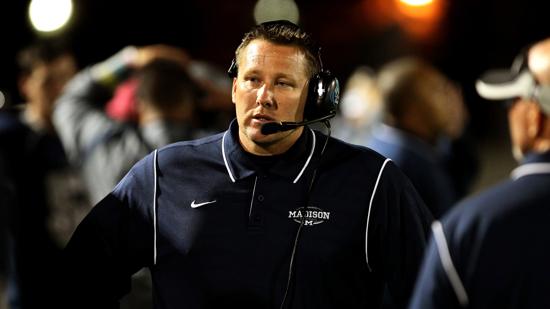 In a few sentences, Rick Jackson is going to be outed, but please don’t treat him any differently. Members of the football-coaching fraternity should continue to embrace him as one of their own despite his activity away from the field.

Everyone’s got their quirks, so there is no reason to pass judgment, even for something as bizarre as this. Ready? When Jackson isn’t coaching the Madison High football team, he’s…teaching high school biology.

The thing is, winning is in his DNA.

It’s not uncommon for a prep football program to emerge as a perennial champion, as Madison has done by winning eight of the past nine Western League titles. But it is uncommon for such a program to be coached by a man who dissects both opposing defenses and frogs.

The Warhawks take on Mount Miguel in the San Diego Section Division IV playoffs Friday, hoping to inch closer to their second CIF title in three years. And if they win, the man at the helm would be celebrated by jocks and nerds alike.

"I take my biology job very seriously, and we're very proud in our science department with what we've achieved," said Jackson, 38, who also serves as the school's athletic director. "But when we're talking about passion? It's football."

We don't see a lot of full-time teachers coaching football these days, especially those outside of P-E class.

So in the spirit of our subject's day job, let's give a quick biology lesson, starting with part 1 -- Anatomy: The anterior cruciate ligament, one of the four major ligaments in the human knee, is vital to the joint's operation. When one tears it, as Jackson did as a junior at Mira Mesa High, his or her future in sports becomes suddenly tenuous.

Given the particular severity of Rick's injury, his aspirations of playing college football deflated as though controlled by a USC student manager. So he figured the only way to get back on the gridiron was with a whistle around his neck.

For Jackson, this led to a newfound focus on academics and ambitions of landing a teaching job. He earned a bachelor's from San Diego State, a master's from Alliant, and hopped aboard the teaching staff at Madison.

But Rick was also the Warhawks' defensive coordinator under former head coach Steve Miner, which brings us to part 2 -- Evolution: When Jackson first started at Madison, there were eight coaches and 16 players -- hardly conducive to survival of the fittest. Now, however, there are more than 40 players for a 9-1 team seeded No. 2 in Division IV.

Jackson said the key was redefining the culture of the program -- consistently placing the kids in uncomfortable situations so they wouldn't wilt when adversity appeared under the lights. The result was the Warhawks winning the Western League in all but one season since Rick became head coach in 2003.

"What you gotta understand is that it's outstanding what he's done," said Madison baseball coach Robert Lovato, former athletic director and fellow biology teacher. "He changed things from an academic standpoint, got the community involved, and now they're a powerhouse."

Madison wide receiver Lee Walker said that there will be times when Jackson is ripping into him, and he'll think to myself, "Coach was being so nice to me in class, like, two seconds ago!" But it's all about knowing how to motivate, right?

Jackson said that, as a coach, he is most proud of Madison's tradition of launching athletes on to play college football. As a teacher, meanwhile, he said he takes most pride in helping to send students on to a higher education.

And that brings us to part 3 -- Symbiosis: Rick knows that there will always be a coexistence between athletics and academics, and he'll never stop stressing the importance of the latter.

If his players are receiving tutoring, he will allow them to come late to practice. This summer, when the season was three days from starting, Jackson spent a weekend at a biology workshop for the sake of his students.

And when Walker walked into Rick's office Tuesday, and told him that the section championship game falls on the same day that he is supposed to take his SAT, Jackson responded, "well, you're going to have to reschedule your SAT, buddy."

I mean, let's not get carried away here.