After a rough couple years at USC and SDSU, former Mission Bay standout Dillon Baxter is trying to start over 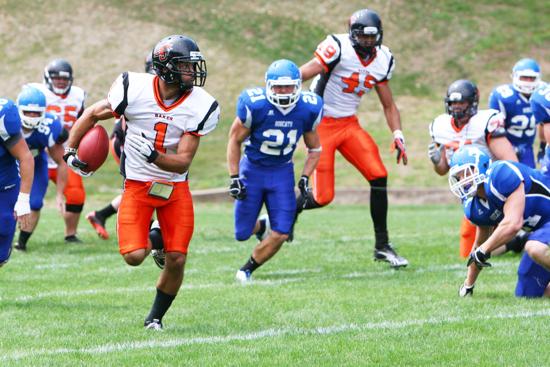 It took two cities, two teams, a plethora of knucklehead mistakes, and the birth of one baby boy.

But a year after Dillon Baxter was asked to leave the USC football program, he has finally re-righted his world.

On Saturday, the former Mission Bay High School sensation will lead his new team – the Baker University Wildcats – in its first NAIA playoff game since 2008.

Baxter, a junior, is the 11th-seeded Wildcats’ feature tailback.

He was hampered by hamstring and ankle injuries earlier this season, but it appears that the former No. 1 running back recruit in the country is finally settling in in his new backfield.

After failing to hit the 100-yard rushing mark for most of the season, Baxter has run for 344 yards and three touchdowns in the Wildcats’ last two games, and he’s raring to go against sixth-seeded St. Francis.

“We’ve gotten him healthy, and he’s starting to show that we can put the load on his shoulders,” said Baker coach Mike Grossner.

When Grossner looks at his 5-foot-11, 195-pound tailback, he sees nothing but potential.

Baxter has had his growing pains in Kansas, but he’s coming along in the classroom, and on the football field.

“We’re not where we need to be yet. Physically, he can get bigger and stronger, and as for his academic skills, he’s getting there,” Grossner said. “But I think he’s putting in great effort. It’s a work in progress from that standpoint.”

It’s been quite a while since any coach has raved about Baxter that way.

Coming out of high school in 2010, Baxter was the top-ranked running back recruit in the country. Courted by the likes of Florida, Michigan and Oregon, he ultimately picked USC.

It was Baxter’s dream school. But the dream was short lived.

Baxter lasted all of a season and a half with the Trojans before head coach Lane Kiffin announced that he was off the team. Kiffin didn’t elaborate, but academic issues and a series of other well-documented transgressions were part of the problem. Baxter wasn’t expelled though – that’s the one misconception from his past that bugs him.

“A lot of people think I got kicked out of USC,” he said. “That wasn’t true. I got my release papers.”

So Baxter came home to San Diego and caught on with the Aztecs in January. This time, he lasted a month and a half.

The U-T reported in February that Baxter was dismissed from the program, but in a phone interview on Friday, the running back said the split was mutual.

“I was there for a month and a half. I didn’t really like how the team worked and everything. Nothing against coach Long, but it just wasn’t for me,” Baxter said.

He spent some time trying to figure out what his next move should be. Then in the spring, opportunity came calling in the form of Mike Grossner.

So when he found out through Baxter’s high school coach that the running back was back home and looking for options, Grossner made the trip out west to visit with Baxter and his mother.

“I made a personal visit to his home, sat with his mom, and really got to know him,” Grossner said. “I wanted to find out where he was in life, and what he wanted to accomplish. And at the end of two hours, I pulled out a letter-of-intent and he signed it.”

Grossner said he never saw the need to talk to Kiffin or Long before taking on Baxter.

“I’m a big believer in second chances. This young man needed somebody to trust. People kind of left him behind,” Grossner said. “He will admit that he didn’t always make the right decisions, but nothing he did was malicious and crazy enough to make me feel like I couldn’t help him.”

Life is pretty good for Baxter these days.

Going from a big city to a town with a square area of 2.3 miles and a population of under 5,000 was a huge adjustment, but a necessary one.

Set in a remote part of eastern Kansas, tiny Baldwin City is a one-stoplight town with no distractions.

“I remember the day we brought him into town. I could see the look of shock,” Grossner said. “But I think it’s helped him immensely. I think it helped him focus on what’s important.”

Baxter is now a communications major – which he says he enjoys more than his business classes at UCS – and he’s finally getting his act together in the classroom.

“There’s been some small bumps along the way, but at a place like ours, you’ve got to go to class and you’ve got to be accountable. There’s only 15 kids in a classroom,” Grossner said. “I think he’s done a great job being a good teammate and a good student.”

Beau Dillon Baxter is named for his father. He will turn 1 on Nov. 25, and Baxter isn’t sure whether or not to hope that he’ll be able to get home for Beau’s birthday.

The only way he might get to come home for his son’s birthday is if the Wildcats lose to St. Francis on Saturday.

If they win, they advance to the next round of the playoffs and will play again on Nov. 24.

Everything Baxter does these days, he does with Beau in mind.

“I definitely miss him,” Baxter said. “I (video chat) with him every day with my girlfriend. We Facetime and I just watch him for 20 minutes each night.”

“He’s just learned to walk,” Baxter said, a new softness evident in his tone as he talks about his boy. “He’s doing his little monkey walk now. Hands over his head, trying to balance himself.”

It’s hard not being around to watch Beau grow. But that motivates him too. Fatherhood has given Baxter a renewed sense of purpose.

“I’m a young dad, so my dream has always been to one day have him see me play in the pros,” said Baxter, 21. “I just want to give him anything he wants.”

It’s a dream he shares with Grossner, who says he hopes that “in a year from now, we will talk about (Baxter) the same way we were talking about him when he came out of high school to go to USC.”

“Just the fact that I didn’t meet everybody’s expectations, and above that, I embarrassed my family a lot of the time my freshman year at USC when I was getting in trouble,” Baxter said. “I regret not working hard and doing what I could have done, and possibly being the next Reggie Bush, like everyone was saying.”

But he’s trying to change the narrative of his life.

Over the last six months, Baxter and Grossner have forged a strong relationship based on mutual trust.

The coach gave the kid something you don’t often get in life – a third chance. For that, Baxter is grateful.

“It meant a lot to me,” Baxter said. “If I do make it in life and become a pro football player, a lot will be because of coach Grossner.”