Aaron Baltazar’s face contorted. He let out a cry and reached down toward his toes. 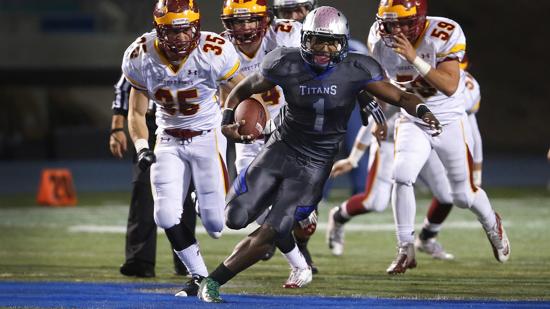 CHULA VISTA — Aaron Baltazar’s face contorted. He let out a cry and reached down toward his toes.

Both of his calves were cramping, the powerful muscles in his legs contracting involuntarily — and painfully — in the wake of another physical game.

But this one had been worth the hurt. Moments later, Baltazar, Eastlake High’s senior running back, walked off the field with a smile on his face and a 28-10 victory over Torrey Pines newly installed in his memory.

Friday’s triumph moved second-seeded Eastlake into the CIF Division I semifinals for the seventh straight year. The Titans (8-3) will host Grossmont, which blistered Rancho Buena Vista 55-34, next week.

“We just wanted it more,” said Baltazar, who rushed for 197 yards on 16 carries. “The past two years we lost in semifinals and us seniors going through that twice, we didn’t want that feeling again.”

Baltazar, who will play for Boise State next fall, staved off a premature ending to his stellar high-school career with touchdown runs of 13, 11 and 12 yards. His combination of power and cat-like quickness made a larger Falcons team look slow and plodding by comparison.

“Our speed,” said Keifer Graham of the difference in this contest. Early in the third quarter, the 5-foot-9 junior linebacker cannon-balled up the middle for a drive-killing sack of Torrey Pines QB Mike Ward.

The Falcons, the No. 10 seed, never posed much of a roadblock, scoring their only TD late in the fourth quarter while finishing their season at 6-6.

“Our defense has really stepped up the last two games,” Eastlake coach John McFadden said. “Our DBs have just done a great job and our front seven (is) just playing at an extremely high level.”

Complementing Baltazar’s big night, Tavarus Green had 118 yards on 12 carries, including a 46-yard run early in the fourth quarter in which the senior weaved through a maze of defenders on his way to the end zone. The Titans, up 28-3 after that score, emptied the bench minutes later.

Meanwhile, the defense limited Torrey Pines battering ram Chase Pickwell, who rushed for 191 yards in a first-round win over Escondido, to 71 yards.