It's summer, but no coasting allowed

It’s summertime but the living is far from easy for Alexandria Young and her teammates on the Mater Dei Catholic basketball squad. 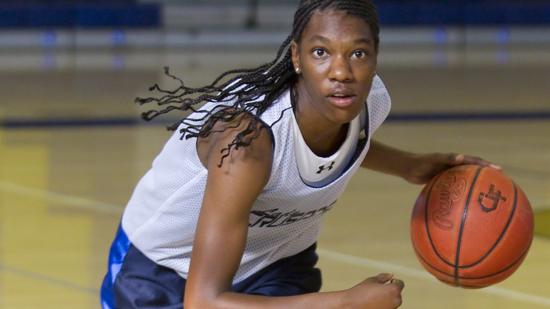 Alexandria Young, who will be a senior at Mater Dei Catholic this year, says pushing hard in summer makes her feel better about the upcoming season.

It’s summertime but the living is far from easy for Alexandria Young and her teammates on the Mater Dei Catholic basketball squad.

That’s because the Crusaders girls, like most of the programs in the San Diego Section, use the summer to work on their game in a variety of ways while there are no bells, tests or reading assignments to distract them.

“Practice makes perfect,” said Young, a 16-year-old senior-to-be who stands 6-0 ½ and plays both the post and wing for the Crusaders. “It’s summer, you’re supposed to do what you want to do, but then you start feeling guilty.

“If I’m not out there working hard, if I’m inside on the couch watching TV, then someone else is (working hard). That pushes me and I always feel good afterward.”

When Young really has a case of the blahs, she just reminds herself that the Bishop’s girls are working hard and that motivates her. The past three years, Bishop’s has been the roadblock to the section Division IV championships and a berth in the state playoffs.

“In the back of my mind, I know we’ll have to play a different game against them next time,” Young said. “Taking a week or two off in the summer is impossible.”

Although Young plays the post a lot during the season, she knows her game after high school will probably require her to be an outside player, so she uses the summer to hone skills like ball-handling, moving away from the ball and shooting the three.

“Summer basketball is like going to Basketball 101, you need to gain the basic knowledge,” she said. “For freshmen and sophomores, it’s a chance to play against older girls. As a junior and senior you learn about the girls who are new to the team. Now that I’m going to be a senior, I have bigger shoes to fill; I’ll have to make sure others do what they’re supposed to do.

“I’m not a yeller — sometimes you have to just do it yourself. I bring up free throws a lot because anyone can work on that.”

Especially Young, who has a backboard in her yard so she’s able to practice four to five times a week, which showed recently when she was selected most valuable player of the Next Level Camp at San Diego City College.

“It’s not just games,” said Monroe, whose program produced a Division IV state champion in 2008-9. “It’s bonding. They celebrate birthdays, they have barbecues, they go to movies.

“On the court, they’re learning each other’s tendencies. When you lose five seniors like we did this past year, summer ball becomes much more important. But the most important thing for us is conditioning.”

The Crusaders practice as a group early in the summer but some of the players are also on club teams, with Monroe’s approval.

The only thing he asks is that they play up-tempo, full-court pressure basketball, which is what he wants his players to do during the season. And if the club team sits back in a zone?

“I’ll talk to the coach,” he said matter-of-factly. “To play at the next level, they’ll have to be complete players. It would be a disservice to them to play on a slowdown team.”

Monroe also encourages the girls to attend camps and the team itself plays a handful of tournaments where they hope to face quality competition to expose areas they can address the rest of the summer and before the start of basketball season.