Oceanside football coach John Carroll has enjoyed a long run of success. But early in his career, Carroll was more average than awesome. 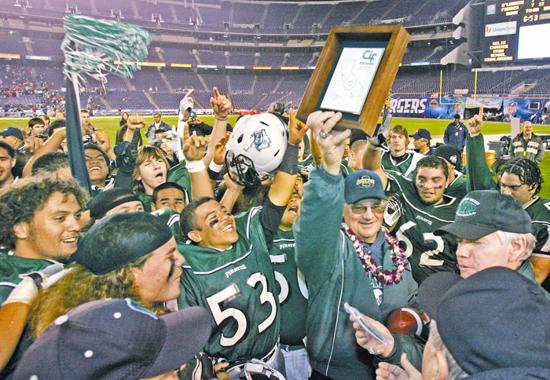 Oceanside High coach John Carroll held aloft the championship plaque after his team defeated Helix High 26-10 at Qualcomm Stadium, one of four division crowns decided yesterday. Oceanside has more football titles, 12, than any other team in the San Diego

The Oceanside High quarterback was blindsided at practice, although this jolt came with a smile.

“Hey Tofi, any idea John Carroll, your hot-shot coach and a constant in San Diego Section CIF title games, was once not-so-hot?""

“Really,"" a stunned Paopao said. “I guess he got better after paying his dues.""

No surprise his No. 1-ranked Pirates are aiming for Saturday"s Division II trophy against Poway at Escondido High.

But it wasn"t always so.

Carroll was a lemon at Orange County"s Kennedy High. And his first six Oceanside years didn"t end with a citrus-flavored Gatorade shower.

Before being all-everything, Carroll was all-wet.

It"s worth peeking at Carroll"s obstacles before he set such high standards on the county"s prep football landscape. We challenge Carroll like he does his players: how did you overcome adversity to become a champion?

Carroll"s Kennedy stint, when he was 26 years old, was a disaster. At JFK, Carroll was IOHH: In Over His Head.

“I was too young when I was hired,"" Carroll said. “I didn"t do my homework and picked it for all the wrong reasons.

“It was close to my house and after just getting married, I thought it was a good idea,"" he said.

But come uniform day, Carroll discovered his britches were too big.

“I had the brash arrogance of someone who had success and thought I could do anything,"" Carroll said, after serving as Anaheim"s Servite High"s defensive coordinator. “I suddenly found out that I"m not a good head coach. I realized that I couldn"t do it and left after three years.""

A do-over was in order, and after a season at Palomar College, Oceanside batted its eyes at Carroll.

Neither were Carroll"s teams –- compared to the powerhouse he constructed. But he knew why.

“We didn"t have a good staff and the players were totally undisciplined,"" Carroll said. “We needed some radical changes to be made.""

Carroll"s insecurities as a head coach motivated him to retain assistants not sharing his vibe. Often Carroll"s Friday night messages to coaches were muddled, and it had nothing to do with shoddy head sets.

“We lost some football games that I think we should have won,"" Carroll said. “I would have to go in front of the kids and tell them why we lost, and I couldn"t tell them the truth.""

Carroll didn"t lie to himself, making a choice which changed Oceanside"s course. In his 24th season here, it"s still working.

“I made the decision, and it"s be true since, that any football game that we lose is my fault,"" he said. “I decided to take full authority and responsibility in all phases of the program.""

Carroll cleaned house while arching his back. He selected assistants sharing his philosophy, becoming what Carroll calls, “the team within the team.""

“We figured out what worked for us,"" Carroll said. “I told our coaches you don"t have to be master of all things. But what you do know, know it inside and out, and know the adjustments which must be made immediately.

"You cannot vary from what you are. You tweak it and adjust, but don"t change it.

“Guys that make wholesale changes on a regular basis, where there isn"t any continuity, any stability, that doesn"t work. So we"ve had the same nucleus on our staff with guys who have been through it, or played for us.""

Carroll has six former players blowing whistles, serving as an extension of what he taught them. They share that Pirates legacy to green players, wearing Oceanside"s green and white.

“It means a lot to all of us,"" said Paopao, North County"s player of the year. “Just coming in as a Pirate, it"s the winning tradition they had before we were even born. It"s getting passed down from the coaches that played here.""

They once looked at Carroll with raised eyebrows. They nod as assistants, realizing Carroll"s direction leads to another final.

“It"s hard to understand why he did stuff when you"re a player,"" offensive line coach Tautua Meyers said. “You"re saying, "What the heck is he doing?" But as a coach, you understand.""

Carroll"s vision is plain for everyone to see. Even through Paopao"s eyes.