First title for Lincoln in 26 years 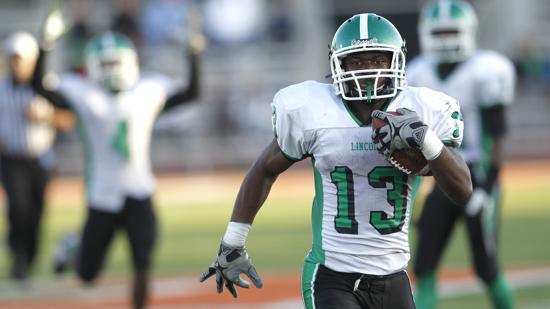 Lincoln’s Jaechon Murphy, who gained 120 yards on 11 carries, scores one of his two TDs. The Hornets cruised after gaining an early lead.

ESCONDIDO — Tyree Robinson stepped onto Chick Embrey Field sporting a new haircut. An “Oregon O” was shaved into the top of his head. Neon tights peeked out from under his shorts. Neon socks and neon-fringed gloves completed his championship-game wardrobe.

It was a get-up befitting his school of choice. The 6-foot-4 Lincoln High senior has committed to play for the Ducks next fall.

The Ducks, never ones to shy away from outrageous outfits, play fast. So does Robinson.

On Saturday night, he wasn’t alone. Fourth-seeded Lincoln blitzed Ramona, finding the end zone three times in the first quarter and running away with a 42-14 victory in the section Division III title match.

The storied Hornets football program raised its first section trophy since 1986, prevailing in a rematch of last year’s first-round playoff meeting — Lincoln, then 1-8-1, defeated Ramona, then 1-9.

This time around, the Hornets (10-3) dominated on the biggest stage, piling up 305 yards of offense in the first half alone. Two punt returns by Robinson set up touchdown runs by Donell Pleasant and Jaechon Murphy as Lincoln led 14-0 less than seven minutes in.

“Just representing both my teams,” Robinson said, explaining his unique look after the game. “This was my last game being a Hornet. Just can’t wait to get out to Oregon next year and represent my other team.”

Hornets defensive end Fred Melifonwu made it 21-0 with a 79-yard fumble return with 3:21 left in the first quarter.

No. 3 seed Ramona (8-5) punted on each of its first five possessions. On the sixth, Bulldogs quarterback Hunter McHargue was intercepted by Tajon Mondy.

The Bulldogs finally got on the board late in the second quarter when, on fourth down, Nathan Cherek sneaked behind a confused Lincoln defense for a 45-yard TD pass from McHargue.

But the Hornets struck again just before the half. Mondy, who also plays quarterback, dived into the end zone on a 6-yard keeper, making it 35-7.

“They knew we had speed,” said Tyrell Robinson, Tyree’s twin brother and fellow Oregon pledge. “We weren’t really worried about their style of play. We just wanted to play Lincoln football.”

Murphy finished with 11 carries for 120 yards and two scores. Mondy added 76 yards on 12 attempts. Tyrell Robinson caught a 25-yard TD pass in the fourth quarter for the final margin of victory.

For the Bulldogs, Cherek had 24 rushes for 180 yards. Ramona went just 2 of 14 on third-down conversions.

“We fell behind so early they got us out of our game plan, and we can’t win a track meet with a team like that,” Bulldogs coach Damon Baldwin said. “We never got into our rhythm.”