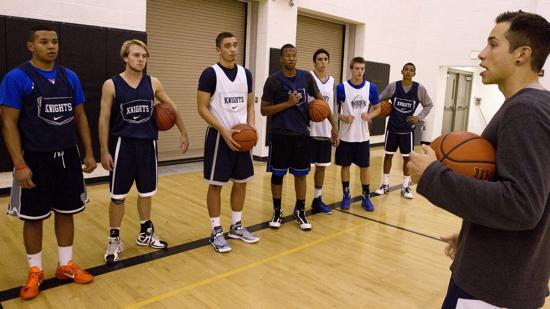 Others, like Torrey Pines, play in cavernous facilities that have held their age well.

And still others, like Cathedral Catholic, Eastlake and Mission Hills, play in shiny, new palaces.

Then there is San Marcos, which practices in a trio of middle schools and plays in everybody else’s gym.

For the last two years, while their new, on-campus home is being built, the Knights have become the Road Warriors.

“It’s something different every day,” said San Marcos senior forward Alex Preciado. “It’s obviously not the atmosphere other schools have, but when it comes right down to it, a gym is a gym.

“As long as there are two baskets, we can play.”

Not even Lincoln went through this same thing a few years ago when its campus was torn down and rebuilt. The Lincoln campus was shut down during construction and students were sent to other schools.

There was no athletics.

There is San Elijo Middle School, a newer facility and rather nice to the untrained eye.

But the floor is slippery and the side baskets are way too close, causing crowded conditions if one group is working on the main basket and another on the side.

There is Woodland Park Middle School, where the baskets are fine, but the floor is some kind of rubberized material.

Then there is San Marcos Middle School, the closest facility to the high school, but the oldest. And the floor is concrete.

“It’s not ideal, and we know it,” said San Marcos Athletic Director Jeff Meyer. “It has definitely been a challenge, getting our teams practice times.”

The wrestlers practice in a portable trailer. The freshmen wrestlers set up mats outside.

The soccer teams are mostly at San Marcos Middle School.

“We have amazing kids here,” Meyer said. “And they keep showing up. Our campus is being completely rebuilt, but we have more kids than ever coming out for sports.”

The new gym is rising from the ashes of the old facility.

It has progressed from plans on a drawing board, to groundbreaking, to foundations being set, to an April target completion date.

That’s too late for Preciado and the other seniors, but it’s fine with junior Ben Perez.

“It’s not as bad for me because I have another year,” Perez said. “It has been a struggle.

“We don’t have buses, so we have to drive to practices and games. And we don’t get paid for using our gas. But the whole experience has brought us closer as a team.

“We drive together, crank up the tunes, tell jokes, swap stories. Really, we’ve turned into a band of bothers. Because of this, we play really well on the road.”

One place they won’t have to drive is Maui, just before Christmas for the Maui Invitational.

“Our fans are really dedicated,” Perez said. “They find us and show up. And our students come to games.”

Maui, however, is probably asking too much of those students.

“I like scheduling a big road trip for the kids,” said San Marcos coach Dante Carey, who was a star player at the high school. “Last year, we went to Florida. This year, it’s Maui. It’s a reward for all the work these guys put in.

“We don’t have an ideal situation, but I’m thankful we have places to practice.

“There was some grumbling at first, but now everyone tries to make the best of it.”

With all five starters back from last year’s team, Carey and the Knights are optimistic about this season.

“We’re not big, so we’ll run, press and play defense,” Carey said. “We kind of like the little-man, underdog role.”

Preciado, who stands 5-foot-10, embraces it.

“We’ve had to overcome a lot,” he said. “Some of the floors we practice on are terrible. We don’t have a sixth-period basketball class like a lot of schools, so we start practice late (usually 3:30 or 4 p.m., depending on the facility).

“At the end of the day, it’s still basketball, and that’s why all the guys are here — because we love basketball.

“Our only goal is to win a championship on someone else’s floor.”