Will to win defines makeup of Torreys’ ‘class clown’ 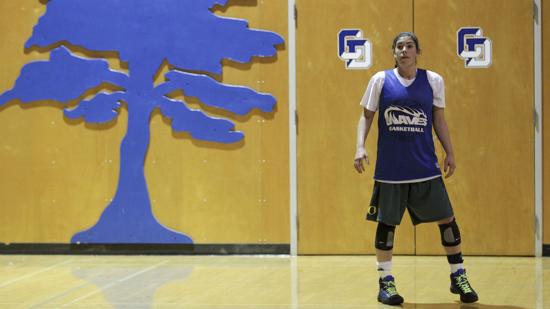 Off the court, Kelsey Plum is your typical, happy-go-lucky teenager who seems not to have a care in the world.

She certainly doesn’t take herself too seriously.

“I was voted the class clown by the student body,” Plum said, laughing out loud.

However, when Plum enters the gym, she transforms into a hard-nosed, rough-and-tumble, do-anything-to-win point guard at La Jolla Country Day School.

The last thing on her mind is her point total.

Winning, in the world of the 5-foot-9 senior who led the Torreys to the Division IV state championship last season, isn’t everything. It’s the only thing.

Her competitive nature is as ingrained as her immense basketball skills, whether attacking the basket or hitting from 3-point range.

Where does that inner drive come from?

Plum points to her dad Jim, a former All-CIF quarterback at Helix High in 1980-81, as the source of her determination to win.

“Growing up, everything had a bounty on it,” Kelsey said. “You had to win or else. Even if we were playing tic-tac-toe, you had to win. Loser either did the dishes or picked up dog poop.

“You learn fast how to win and whatever you have to do, you do. But I will admit there is a lot of dog poop in my background.”

Her sisters learned that lesson, too. After playing at Poway, Caitlin is now a senior volleyball player at UC Davis and Lauren is a junior setter at Oregon.

Kelsey played volleyball her freshman year at La Jolla Country Day, but when she missed out on practices while the Torreys were en route to winning a state title the decision on whether to continue her volleyball career was an easy one.

Then a 5-5 setter, she turned her undivided attention to her passion and took over as the point guard. That drive has helped the team to an 85-10 record during her first three years on the basketball team.

“I played against her a little when she was in eighth grade and she played hard, played fearless,” said LJCD coach Terri Bamford, who was inducted into the San Pasqual High Hall of Fame as a player last fall. “Her passion for this sport is what separates an elite player like her from a good player.”

Bamford should know. One of her former players, Candice Wiggins, who played at Stanford and is now in the WNBA for the Minnesota Lynx, played the same way at point guard eight years earlier.

“Both of them raise the level of excitement on the court and in the building,” Bamford said. “Candice was a natural, but Kelsey has had to work 10 times harder to get the speed she’ll need from here on out.

“Kelsey has such an understanding about the game now.”

In last year’s state finals, Plum took a shot from NBA range. Bamford had a feeling Plum was in for the game of her life in what became a 72-41 blowout of Richmond Salesian. It was 33-10 at halftime.

“I was bawling like a baby when we lost in the state playoffs sophomore year,” Plum said. “I was in the gym the next day. I’m still upset we lost that year, and I held onto that until last year.”

Plum understands it will be hard to repeat last year’s 32-1 season that included winning the final 21 games since a 50-48 loss to Long Beach Poly on Dec. 30, 2011 in the Oaks Christian Christmas Tournament.

For one thing, the twins, Maya and Malia Hood, graduated and now play at USD. The Hoods combined to score 29 points in the state finals.

“I’ll need lots of patience this year,” Plum said. “It’s cool. I kind of like being in this new environment, although I’d love to have the Hoods with me for one more year. What do they say about what doesn’t kill you will make you stronger.”

Plum is not looking for strength. She’s intent on giving strength. Last week, she averaged 30.3 points a game in leading La Jolla Country Day to the championship of the Sweet 16 Invitational. Plum scored a school-record 51 points in the championship game.

Her role, in addition to running the show and making her teammates better, is to be the experienced rock the rest of the Torreys can lean on.

Despite having a new-look team, it’s still all about winning for Plum, who verbally committed to Washington.

“Washington needs a point guard next year and I kind of wanted to get away and start something new on my own.

Nothing else is all that important in Plum’s world.