Santa Fe Christian coach Nick Ruscetta is among the reason the Eagles have advanced to Friday's state regional championship. 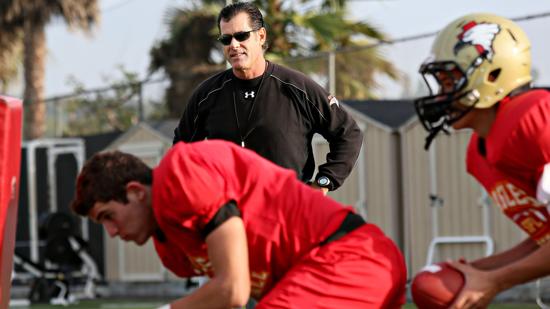 SOLANA Beach – A campus visitor searches for a certain Santa Fe Christian coach, but maybe he has the title wrong.

“I tell the kids at the beginning of the year, I"m not the head football coach,"" SFC"s Nick Ruscetta said. “I"m the head janitor.""

Ruscetta has picked up just fine after former SFC coach Brian Sipe left for San Diego State four years ago. The Eagles are in Friday"s Division IV CIF State Regional Football Championship against Arcadia"s Rio Hondo Prep, and there goes the, uh, head janitor with pep in his step.

It seems Ruscetta is always on the move, patting a back here, barking out advice there. The ex-Escondido High coach found a home at RSF by playing an old-school style of football few recognize.

In the age of spread formations and point-a-minute offenses, watching the Eagles work is like thumbing through a football history book.

When you"re this close to the Del Mar Racetrack barns, there"s nothing wrong with being born to run. And run. And run.

“I like that about him,"" said Tony Miro, and why wouldn"t he? “I play fullback so I get the ball 50 percent of the time. I like the pound-and-ground theory. I don"t like the prima donna kind of stuff, where you"re throwing it around.""

Instead the San Diego Section Division V champion Eagles soar with an option attack leaning on angle blocking, misdirection plays and fakes, while showing a physical persona up front.

“We don"t attempt to do anything fancy,"" Ruscetta said. “We do what allows you to win at the high-school level.

“The wide outs don"t get the ball much, but at the end of the day, winning floats kids" boats.

“In the long run, it allows us to compete. If we ran a spread we would get road-graded.""

Before finding higher ground, the Eagles had trouble rising from a challenging nonleague slate with two wins in their opening five games.

But showing a 2-3 hand in early October wasn"t in the cards.

“It was mainly our schedule,"" Ruscetta said. “But if we hadn"t have done that, we wouldn"t be where we are.""

Instead of getting down, the rallying cry of “NBD” went up off the surrounding hills. The team"s mantra of “Never Back Down” was being tested.

“We went back to the Day One stuff, what we learned our freshman year: the basic formations and a lot of repetition,"" Miro said.

“He put it in our heads that we are a team that didn"t deserve this because we worked too hard throughout the summer to be 2-3. That was unacceptable for this program.""

But Ruscetta, and his dynamite defensive coordinator, Dan Egan, didn"t reinvent the wheel. Instead they started rolling through the game"s fundamentals, and familiarity, just like they"ve done for nearly a decade.

“As long as Nick and I have been together, we haven"t changed things regardless of who we are playing or what happened the previous week,"" Egan said. “If we are playing a patsy or Torrey Pines, it didn"t matter because we are going to prepare the same. We want the kids to play consistently well and the only way to do that is to be consistent as well.""

Well, that"s swell, and don"t discount Ruscetta"s role in bringing it together. He"s famous for dispersing credit, reluctant to take a bow unless he"s bending to collect a discarded towel.

“He is so humble and unassuming,"" Egan said. “His ego is always in check.""

“To me it"s a job that if you"re doing it the right way and serving your team,"" Ruscetta said, “there is nothing glorious about it.""