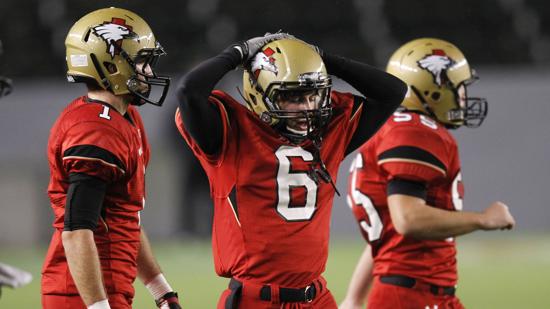 The Eagles, the Southern California champions, were run over by Northern champ Modesto Central Catholic 66-7 in a steady rain that started minutes before kickoff.

“That’s the best team Santa Fe Christian has ever played,” Eagles coach Nick Ruscetta said. “I know the score is lopsided, but we won our league, won our section, and we’re Southern California champions. So there is a lot to be thankful for.

“I’m sad it’s over. I told the kids they could sulk and feel bad for about five minutes, then I want them to feel good about what they accomplished.”

The point total was one of 10 bowl records set by the Raiders on Friday, including rushing yards in a game (534) and total offense (590).

The game started badly for Santa Fe Christian (11-4) as the Raiders went 80 yards on six plays with Ray Lomas carrying for all 80.

Rey Vega went 60 yards on the first play of Central Catholic’s next series and Blake Escobar capped a five-play, 46-yard drive with a 6-yard TD run on the next possession.

The total was 28 at the end of the first quarter when Vega capped a four-play, 63-yard drive with a 10-yard TD run.

The score was 59-7 at the half, and the final 24 minutes were played with a running clock.

“It’s a tough deal when you lose the last game of the season,” Ruscetta said. “But I want to celebrate all the positive things we did this season.”

Those things were accompished with quarterback Hunter Vaccaro, fullback Tony Miro and offensive/defensive lineman Dominic Burtech in the lineup.

Burtech went out with what he hopes are only bruised ribs when he was hit from the blind side 10 yards behind a play.

“I’m tremendously disappointed,” Burtech said. “It was slippery on the field, and we missed a ton of tackles. But they were good, really good — big, strong and fast.”

Vaccaro, the player Ruscetta calls the team’s “Johnny Football” suffered a shoulder injury early in the second quarter and was in street clothes on the sideline in the second half.

He was replaced at quarterback by sophomore Carter Roberts, who Ruscetta said has been on the field for two plays this season.

“Carter told his mother before the game that he hoped to get on the field for one play, and he ends up playing almost three quarters,” Ruscetta said.

Miro, the team’s leading rusher, suffered a knee injury at the start of the second quarter and had just two carries for four yards.

“I think I tore my MCL again,” a sobbing Miro said.

Jerry Harper led SFC with 10 carries for 89 yards and had SFC’s only touchdown on a 67-yard, second-quarter run.

The Eagles, who rarely throw, completed just 4 of 16 passes for 66 yards and were intercepted four times.

Included in the Raiders’ 534 rushing yards were 15 runs of 10 or more yards with eight of those for more than 20.

“We missed a lot of tackles,” Burtech said. “We just didn’t do what we’re capable of doing.”