Iloski qualifies for global competition that will take him to Europe for series of games. 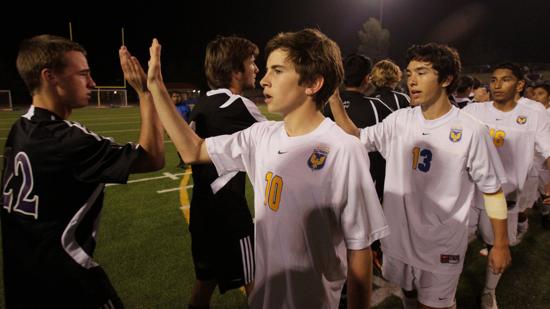 San Pasqual High’s Brian Iloski (center) has been one of the best players in San Diego County over the last few seasons, but he’s skipping prep soccer this winter to play for an international team that will train and play games for six weeks.

ESCONDIDO — It’s a soccer program called “The Chance,” a global competition to spotlight youth players before international coaches and scouts for a likely pro future. Certainly, Escondido’s Brian Iloski has been making the most of his chance.

Of 150,000 male players from 55 countries who were eligible, the qualification process weeded it down to 100 who competed in Barcelona, Spain, over 10 days in August for a spot in the final 16 and an upcoming international tour together. From the U.S. tryouts, Iloski and three others qualified as part of America’s first time in the high-powered happening sponsored by Nike.

In Barcelona, the field was first trimmed to 52, with Iloski and one countryman included. Then Iloski survived a cut to 26 as the lone American, and finally, he made the final 16 through a last set of tryouts and two games.

“I definitely felt pressure to perform since I was representing the United States,” said Iloski, a San Pasqual High senior. “Also, I just saw it as an opportunity to show coaches what I have. I just went out and tried to have as much fun as possible. When I’m having fun, it means I’m playing good.”

The final 16 will come together as a team for six weeks starting Jan. 20 for an itinerary that opens with training in the U.S. and concludes with games in Italy and England against representatives from European clubs.

“It’s incredible,” said Mike Iloski, Brian’s father, who coached him during his early years in youth soccer. “As a little kid, he had a lot of potential. He’s been a quick learner and a hard worker. Also, he doesn’t let things get to him. He has a special talent. When the stakes get higher, he just does better.”

Between his selection and the next step in The Chance, Brian Iloski also joined the U.S. under-18 national team for his first international appearance, against Canada on Nov. 23 in Carson. As an introduction, he played 34 minutes in a 2-2 tie.

It was just more than a year ago that Iloski helped the San Diego Surf under-15 academy team become the first boys squad to qualify for the U.S. Youth Soccer Nationals from the elite club long known for its strong girls teams. In turn, he became further noticed on the national scene.

“Brian’s always been a good player,” said Paul Currie, his coach on the Surf team. “He got the opportunity to play at that level with top players similar to his ability, and he took the place by storm. He’s just one of those kids who has natural ability. Also, he has a great attitude and works hard at his game.”

The 5-foot-5, 130-pound Iloski prefers playing as an attacking midfielder, yet also performs at forward as the occasion demands.

Because of this year’s circumstances, Iloski is bypassing high school soccer. Over the previous two seasons, he was a standout on San Pasqual teams that ranked among the San Diego Section’s best.

“He’s a very smart player who can see the play developing,” Eagles coach John Burson said. “That kind of soccer IQ is really important. His ability to run on people with the dribble and keep it close to his feet and do combination plays are by far his biggest asset.”

In the section Division I semifinals last season, Iloski suffered a broken collarbone that sidelined him for 12 weeks. San Pasqual eventually lost in the final to Torrey Pines on penalty kicks.

Soccer reigns supreme in the family of Mike Iloski, the cousin of Escondido’s Jovan Kirovski, a former U.S. national team member and European veteran who is now an assistant coach for the Los Angeles Galaxy of Major League Soccer.

Mike Iloski played at San Marcos High and Palomar College. He later had a stint in indoor soccer with the reserve team of the San Diego Sockers under coaching icon Ron Newman.

“My dad has been helpful guiding and inspiring me,” Brian said. “He’s always taught me what to do and he’s been to my games. He even went to Barcelona to watch me. That type of commitment to help me be a high-level soccer player is pretty amazing.”

The family roster also includes Brian’s younger brothers, Eric and Milan, each active in soccer. At San Pasqual, Eric is the only freshman on the JV roster this season.

“I try to give them tips if they listen to me,” Brian said. “We always play soccer, tennis and a game called one-touch in the backyard.”

From his backyard to the wide world of soccer, Brian ranks as the youngest player among The Chance final qualifiers, who range up to age 22. He turned 17 on Sept. 14.

Most of the final players in the first version of The Chance two years ago received pro deals. While Brian has committed to Cal for college soccer, he and his father say he will weigh any other options only if and when they’re offered after the tour.

“Now I’m just looking forward to another opportunity,” Brian said. “I’m just going to try to have as much fun as possible and learn as much as possible. I’ll do my best, and then we’ll see.”

Again, making the most of his chance.