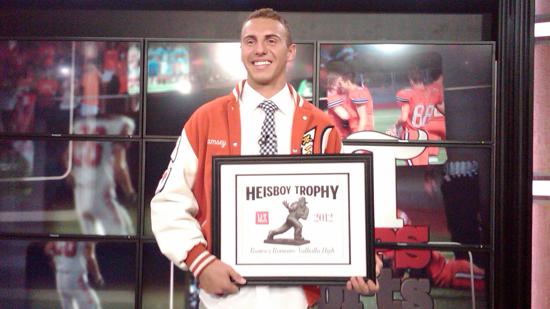 Valhalla senior quarterback Ramsey Romano was awarded the first Heisboy Trophy, symbolic of the most outstanding high school football player in the region.

Upon being handed the trophy in front of teammates and family at the U-T TV studio, Romano said, “It feels good. I’m glad that I’ve got my teammates here to support me.

“This is definitely a trophy that is going to continue throughout the years and there are going to be some great players after me that will receive this trophy.”

The trophy, which is actually a plaque, features a caricature of the Heisman Trophy. Illustrated by two-time Pulitzer Prize-winning U-T San Diego cartoonist Steve Breen, the drawing depicts a high school player in the Heisman prose. The player is sporting a backpack, sneakers and a baseball cap turned backwards.

U-T Chargers writer Michael Gehlken came up with the idea of naming the award the Heisboy Trophy.

Playing behind Frank Foster in 2011, Romano didn’t start at Valhalla until this season. The 6-foot-2, 185-pound passer threw for 3,380 yards and 30 touchdowns for the Norsemen, who finished 9-4.

Romano not only was a productive quarterback but an exciting one, too. He repeatedly avoided pass rushers. buying time for receivers, then completed passes on the run or scrambled for first downs.

He was at his best in the Division II semifinals against eventual champion Oceanside. In a 31-28 loss, Romano completed 17-of-33 passes for 295 yards and 1 touchdown.

"Very athletic," said Oceanside coach John Carroll. "He did a great job of avoiding pressure and keeping plays alive. He was literally making us run from sideline to sideline.

"He made plays on the run both with his feet and his arm. He did a great job of avoiding a very, very hot pass rush."

“He took on a lot as a first-year starter,” said Valhalla head coach Charles Bussey. “There was a little bit of an unknown as to how he’d be able to handle the responsibility on a team expected to play well. The team also lost a lot of leadership from the year before.

“He handled it beyond any of my expectations, not just on the field but taking control off the field and leading by word of mouth and action. I can’t be any more proud of him.”

Said Ben Howard, one of Valhalla’s leading receivers, “Ramsey is highly deserving of this award. He worked really hard in the weight room and on the field, studying film and stuff. So I’m very proud of him.”

While Romano has accepted a baseball scholarship to the University of Michigan, he’s considering playing football at another major university.