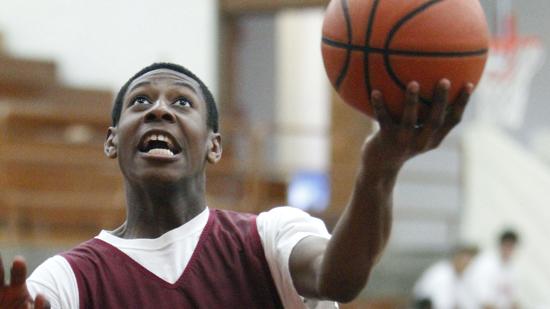 With Cheikh N’Diaye of Army-Navy and Kameron Rooks of Mission Hills, the focus this high school boys basketball season in San Diego County is on the 7-footer.

But as Foothills Christian coach Brad Leaf said, “This is a crazy freshman class.”

There are no fewer than 10 freshmen in San Diego County who are starting or playing significant minutes, and most are at the better programs.

Most of them are on ESPN’s list of top players in California for the 2016 graduating class.

“It’s going to be really interesting to see who develops,” Leaf said. “There are a ton of freshmen this season who have a chance to become stars down the road. It will be fun to see who emerges.”

With Leaf’s comments in mind here is a peek — in alphabetical order — at what are considered the Fab Five of the class of 2016:

Scouting report: The family moved from Canada in the summer and Cyrus became an instant starter. Through the team’s first five games, Cyrus is leading the team, averaging 10.5 points a game. He’s very athletic, jumps extremely well and defends.

Coach John Olive’s comment: “Brandon is the most-gifted athlete I’ve had here. He’s fast. He’s quick. He has great hands. He has a great feel for the game. The most-amazing thing, though, is that he fit in well with an experienced group. He has a great personality, and that has allowed him to make friends with the seniors who he’s taking playing time from.”

Scouting report: He may be the best prospect in this class. T.J. is the brother of former Foothills great Troy Leaf, the San Diego Section’s all-time leading scorer. T.J. has grown five inches over the past 12 months without losing his guard skills. Through five games, he’s averaging 24.6 points and 12.0 rebounds a game.

Coach Brad Leaf’s comment: T.J. can play every position on the floor, and that freaks me out as his coach and dad. He has deep range as a shooter (making 10 of 29 3-point attempts) and he has a high, college-type release on his shot. He’s athletic. He’s not Chase Budinger athletic, but he can dunk on you, too.”

Scouting report: He has a high basketball IQ. On a team that is 8-1 and ranked No. 2 in San Diego and returned all five starters, he has carved out a lot of playing time. He’s averaging 6.0 points and 3.4 rebounds a game.

Coach Will Cunningham’s comments: “Reid is a really fast learner. He picks things up quickly. He has good hands and is a good finisher. More importantly, he’s coachable. He not only listens to the coaches, but he listens and learns from the older guys. He’s in our rotation as a freshman. That says a lot because we have 10 seniors. He’s just a solid young man.”

Scouting report: Long and lean, he runs the floor well and can shoot. On a team that is 9-2 and averaging 72 points a game, he’s averaging 14.7 points a game (second on the team) and 2.5 rebounds.

Coach Dante Carey’s comments: “Johnny has a chance to be good, real good. He’s so smooth, so skilled. If you don’t know him, it’s hard to tell how hard he’s playing because he’s so smooth. We have a good team, a veteran team, and he has found a niche. He’s the future of our program as we move back on campus and into our new gym.”

Scouting report: He could develop into the top point guard in the county in the next couple of years. A great passer, he’s a very heady player. He’s starting for the No. 3 team in the county.

Coach Mike Haupt’s comments: “He has an unreal feel for the game, and you want your point guard to have that feel. He does what he’s told, does what he’s asked to do. He goes against good, older players every day in practice, and you can see him getting better. He grew up playing in the parochial leagues, so he has played a lot of competitive basketball.”