Let’s see, now that it’s basketball season, Mar Vista High’s Andres Preciado must be inside the gym practicing at all hours. 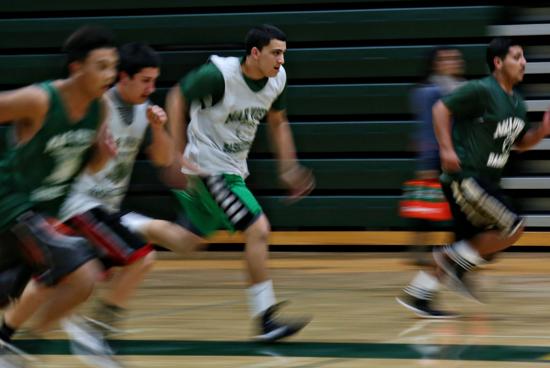 Andres Preciado (middle) runs during practice in the gym at Mar Vista High School. It’s time for winter sports, so he is in the gym playing basketball. In spring, it’s on to the baseball diamond, where he plays several positions, and in the fall, he’s a l

Let’s see, now that it’s basketball season, Mar Vista High’s Andres Preciado must be inside the gym practicing at all hours.

Talk about your man for all seasons.

Preciado, a still-growing 6-foot-5, 230-pound junior, was one of the mainstays up front on the Mariners football team as the starting tackle, plays center on the basketball team where he has led Mar Vista to 5-0 start and come spring he’ll don his baseball uniform and play third base, or pitch, or first base, or outfield — well, you get the idea.

Cornered as to which of the sports he likes best, the outgoing Preciado used some of the diplomacy he may have picked up as commissioner of finance for the school’s ASB, replying, “honestly I can’t say one is better than the other.

“I’ve played baseball since I was five. I’m probably best in football. Basketball is really a team sport where one player can make a big difference.”

He could have a future in politics, but not until he finishes high school where he swears he knows the name of every administrator, teacher and almost every Mar Vista student.

“I like being involved,” Preciado said in understatement. “I like counting money so commissioner of finance fits. I might run for ASB president next year but I’m not sure.”

He’ll have to do that in his spare time, which can’t be much since he carries a 4.15 grade-point average and plays sports year-round.

This time of year Preciado is roaming the middle of the basketball key, setting screens, blocking out on rebounds and going up to score. He enjoys it a lot more than last year.

“We only won three games last year,” said Preciado of the Mariners’ dramatic turnaround. “The difference is that this year we’re a lot more experienced. Last year was my first on the varsity and I wasn’t sure what to do. I’ve learned what my capabilities are and I try to experiment.”

“He has a hoop in his driveway and he works really hard during the season and in the offseason,” Dumas said. “You can just see the difference. You tell him something and he works on it until he gets it right.

“For example, we’ve been trying to get him to jump into the other team’s passing lanes more and in one game he had seven steals jumping into the passing lanes.”

Mar Vista recently won its own Bout in the South tournament with an 8-point overtime victory against Castle Park. The Mariners were down by 12 at one point but the still young club refused to buckle, battling back for the victory.

“It’s an amazing feeling to go 5-0 compared to last year,” admitted Preciado who was selected MVP of the tournament and is looking to attending Cal or UC San Diego after next year. “I take losses real hard — I don’t like losing. After a loss, the next day or so I dwell on what I could have done better.”

But how does he jump so easily from one sport to the other?

Preciado says it’s a matter of focus. During football season, his entire focus is on becoming the best football player he can be. Moving indoors for basketball, he strives to be the best basketball player on the court. Move out to the baseball diamond and until he hits 1.000, he knows he can always get better.