Look for small players with an unwavering passion for hoops in next week’s SoCal Holiday Prep Classic. 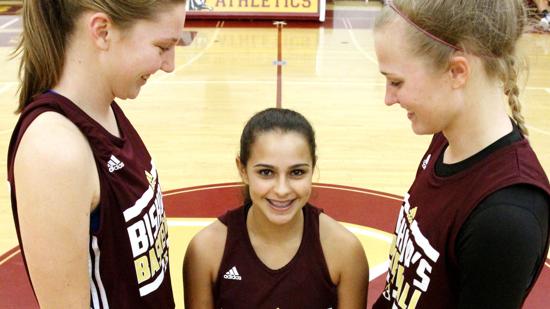 Five-footer Cynthia Burboa adds something to a Bishop’s girls basketball squad that also has 6-3 Devon Roeper (left) and 6-1 Sierra Ducey.

What is the first thing you notice about a basketball team when the players come onto the court or when you look at a roster?

Even in girls basketball, it’s the same thing. Does this team have much height?

Size up front, it seems, equates to more victories in people’s minds.

Until the game starts and then one thing becomes crystal clear.

“We have some value to the team,” said Cynthia Burboa, a 5-foot point guard at The Bishop’s School. “We may have to work extra hard to prove it, but we can play this game.”

Quite a few shorter players — “I get called Little One a lot,” said Burboa — will be on display next week at the 10th annual SoCal Holiday Prep Classic at a number of gyms around the county.

In all, 53 teams will play for championships in seven divisions starting Wednesday and concluding Saturday.

Besides being the shortest players on the team, these “shorties” will be easy to recognize. Their passion for a game where most other players are six inches to a foot taller far exceeds what they lack in height.

That’s just the way it is for them.

“My dad tells me all the time that size should not be a negative on the court,” said Sierra Claudio, a 5-foot-1 sophomore point guard at Poway. “Coach (Jay Trousdale) says the same thing. He says I have to become a pest out there and make the bigs uncomfortable all the time I’m on the court.”

Claudio backs up Mandy Castro for the Titans and has learned a lot about surviving among the bigs to the point of excelling in the sport.

It’s not all about scoring points for shorties.

They run the offense, distributing the ball to the scorers. They harass the other team’s point guard on defense and even double team in the paint whenever they can catch an unsuspecting taller player who isn’t paying attention.

Anything to disrupt the other team.

And if you’re a taller player, beware of a shortie stepping in front of you to take a charging foul.

“People overlook me on the court all the time,” said Leigh Ann Fria, who barely qualifies as a shortie at 5-31/2 at Mission Hills. “On offense, I run the show and try to draw the defense to me away from my teammates.

“On defense, I have to keep moving all the time. I’m like a secret ninja out there.”

In Fria’s case, she has an even heavier burden. She’s also the leading scorer for the Grizzlies.

When she was much younger, Fria thought she’d never be a shortie. After all, her dad is 6 feet and in rec ball in fourth grade she played center. At 4-feet-10 back then, she was the tallest player on her team.

As friends and teammates outgrew her, though, Fria started learning how to be a point guard out of necessity.

“It took me a while to learn to play outside,” Fria said. “Moving without the ball and handling it all the time was hard to pick up. I was used to just camping out underneath.

“I wonder all the time what it would be like to be 6 feet, even for just one game. The way I was growing I figured I’d be 6 feet in no time.

“Maybe I just hit my mini-growth spurt way earlier than most people.”

Being a 6-footer is also something Claudio has spent time thinking about.

“I feel like the game comes easier when you’re tall,” she said. “They do more banging down low, but I have to run all over the court.

“Bigger players try to push me a lot, so I have to try to push them back before they get the ball. When they dribble, get down as low as I can get and swipe at the ball.

“I can’t afford to play at half speed, and I have to be mentally tougher than everyone else.”

That style is a trademark of Burboa’s play, too.

“Coach (Marlon Wells) says I have to be energy on the floor,” Burboa said. “When I score I hear coaches yelling at the person guarding me. ‘How can you let a girl who is all of 4-foot tall score on you?’

It’s the only way a shortie can play basketball.