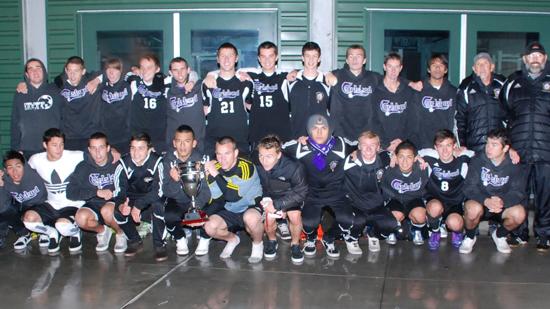 Members of the Carlsbad soccer team savor their tournament championship. The Lancers are 12-0-1, outscoring the opposition 30-4 this season.

Oceanside — Carlsbad goalkeeper Matt Deemer persevered despite a downpour during most of the tourney final, ultimately shining in an extended session of penalty kicks. Then he was greeted by a torrent of teammates who piled on him in celebration.

The Lancers enjoyed defeating Long Beach Millikan for the Showcase Coast Division title in the 18th annual Southern California Classic on Saturday at Oceanside High while remaining unbeaten on the season.

Deemer made a block to start the eighth round of penalty kicks, and then Jared Marr converted to give Carlsbad a 6-5 edge in PKs. This came after a 1-1 tie through regulation and 20 minutes of overtime.

“It was pretty nerve-racking to be out in the rain,” said Deemer, a junior in his third varsity season. “Then we got six, seven (penalty) kicks … and I had to come up big.”

The Lancers (12-0-1) have counted on Deemer to do so all season. In his 11 games, he has allowed only three goals, including one on a regulation penalty kick. He has nine shutouts.

“If there’s a better goalkeeper in San Diego, I haven’t seen him,” Carlsbad coach Jeff Riccitelli said. “He’s been fantastic.”

After trailing 1-0 at halftime, the Lancers tied Millikan (11-3-2) with 14 minutes to go in regulation when Ruben Gonzalez tapped in a loose ball dropped by the goalkeeper.

“That was really exciting,” said Gonzalez, a senior midfielder. “I’m not a big fan of the rain because it messes up everything. But we pulled through.”

The Lancers, with 10 returning starters from last season, have outscored the opposition 30-4 this season. In four tourney games leading to the final, they had a 14-1 edge, including a goal in every game by Gonzalo Jimenez.

“It’s been magical, to say the least,” Deemer said. “We have a lot of big victories, finding a way to win. Hopefully, we can keep it going all the way.”

“In the larger picture, this tournament was huge for us,” said first-year LCC coach Chris Dean, who formerly coached at San Dieguito. “We came in with ups and downs, and we had a heck of a run. We can put this game behind us. We have the rest of the season ahead of us, and we can build off the positives from this.”

The Mavericks, with a roster fortified by four JV players because of injuries and vacations, enjoyed a tourney highlight in the quarterfinals when they dealt St. Augustine its first loss of the season — 2-1 in overtime on a goal by Oscar Pedro. They then topped Torrey Pines on penalty kicks to reach the final.

Bellarmine bounced back to go unbeaten following a 1-0 loss to St. Augustine in its tourney opener, which was decided by an own goal.