The Wolfpack's win could be the start of a wild Southwestern League race. 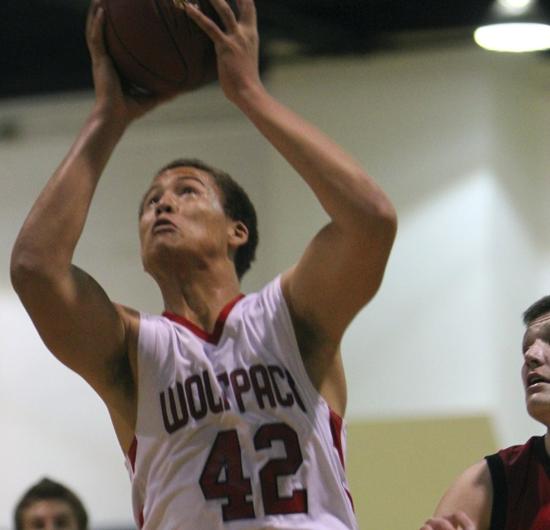 TEMECULA — The Southwestern League boys basketball race is only one game into the books. Murrieta Valley’s boys have already equaled their league-loss total from the previous two years.

Great Oak sent a message by upsetting Murrieta Valley 54-39 in stunning fashion Wednesday night. The Wolfpack (10-6, 1-0) bullied the Nighthawks (11-5, 0-1) inside the key with the post presence of both Justin Sadler and Patrick Sniff.

Sadler sat through much of the second half in foul trouble, yet the Wolfpack didn’t skip a beat as Sniff took over inside. He finished with an eye-popping 19 rebounds and five blocked shots while scoring eight points.

Not bad for a player who even didn’t start. But there was strategy behind Great Oak coach Robert Hickey’s decision to keep Sniff on the bench during tipoff.

“He does that so if one of the bigs gets in foul trouble, each one of us can still play,” Sniff said. “If we get into foul trouble or if we get tired, both of our bigs are in there and we’re fresh.”

Hickey’s rotation is designed to generate a continuous 32-minute size mismatch against most opponents.

Teammate and point guard Latrelle Franklin then adds a different dimension in the backcourt with his speed and explosiveness. Franklin put an exclamation mark Wednesday by scoring eight of his 12 points in the fourth quarter. He also had eight assists.

“If we have the lead in the fourth quarter, the ball is going to be in his hands,” Hickey said. “He’s a great ball handler. He sees the floor well.”

What made Great Oak’s double-digit victory even more remarkable is it was dinged for an inordinate number of fouls (16) compared to Murrieta Valley (three) through three quarters. However, the Nighthawks failed to capitalize, shooting just 12-of-27 from the free-throw line.

Although Murrieta Valley hasn’t been accustomed to losing league games in recent years, Tarabilda said he told his team afterward, “the balloon hasn’t been deflated” because of one league loss in a Southwestern League he thinks won’t be won by an undefeated team.

Great Oak, which compiled only four league wins in two previous years, is suddenly riding a wave of confidence. The program has never posted a winning record in Southwestern League play.

“If we can beat them and play like we did tonight, we can beat anybody in this league,” said Sadler, who had 14 points and six rebounds. “That’s what I think. Whoever comes in our way is going to have a tough time against us. I am looking forward to it.”