Murrieta Valley's Katie Clark is getting off to a good start at Johns Hopkins. 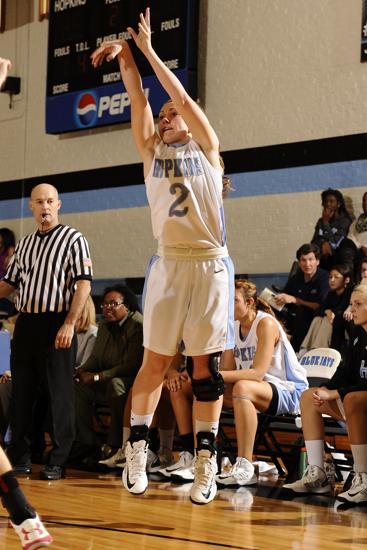 That’s because Clark’s institution is one of the nation’s elite universities, rated as the country’s 13th most prestigious school in the latest U.S. News rankings.

Murrieta Valley High’s 2012 valedictorian discovered during her first semester that the curriculum at Johns Hopkins is definitely a notch above previous experience.

“My classes have been challenging but not impossible, which has been a good next step in terms of challenging myself academically,” Clark said.

Clark, a public health major, fared well with a 3.8 grade point average, which she was content with, given the strenuous coursework.

Clark is also taking prerequisite courses for medical school as she aspires to be a physician.

Medical school, though, is still years away as she is just a few months into her women’s basketball career.

Clark amazingly was on the court for the start of the Blue Jays’ season on Nov. 15 after suffering a torn ACL and MCL in her left knee in a state playoff game last March.

“I still feel like my knee is still getting stronger,” Clark said. “I don’t feel like I’m fully back to where I was before the injury but definitely getting close.”

Clark has come off the bench in all 16 games for the Division III Jays this year, averaging 10.1 minutes per game.

It’s common to see Clark shoot from long distance when she enters the floor. She ranks third on the team in 3-pointers.

She recently enjoyed her best game as a collegian, tying for the team-high with eight points in Johns Hopkins’ 71- 50 loss to Messiah College on Jan. 2.

Ten of the 15 players on the Jays’ roster are either freshmen or sophomores, so the team had some growing pains, but they have since strung together three straight Centennial Conference wins to get to 5-5 and 7-8 overall.

The 2011-12 Southwestern League MVP says the most glaring transition from high school has been adapting to head coach Nancy Funk’s style of play on the defensive end of the court.

With her university being located in Baltimore, Clark has enjoyed some of the benefits of living in a major city, attending Ravens and Orioles games during her free time this fall.

“I have never seen such loyal fans,” Clark said of the Ravens faithful.

And she says the city’s renowned crab cakes and seafood live up to the reputation.

With her winter occupied, Clark’s focus is getting the Blue Jays back to the Division III tournament for the third consecutive year.

“These past few games, we have definitely been picking it up, and we’re excited to see what the rest of conference has to hold,” Clark said.

• SMU defensive tackle Aaron Davis (Elsinore) is getting serious consideration as a professional prospect as he is set to play in Saturday’s NFLPA Collegiate Bowl at Home Depot Center in Carson. Davis will be coached by former Super Bowl champion head coach Dick Vermeil in an all-star game which features some of the nation’s most outstanding seniors. The 6-foot-3, 290 pound senior had 35 tackles and four tackles for a loss in 13 games for the Mustangs in 2012. The game kicks off at 2 p.m. and can be seen on ESPN2.

• Ta’Rea Cunnigan (Chaparral) scored 26 points to propel San Jose State to a 103-80 Western Athletic Conference victory over Utah State on Saturday. The 103 points tied a school-record for most points scored in a single contest.

• Mitchel Anderson (Chaparral) had a double-double with 16 points and 11 rebounds to guide Cal Poly Pomona to a 58-51 win over Cal State East Bay in California Collegiate Athletic Association play on Saturday. The Broncos sit atop the CCAA standings with a 7-1 record and an 11-1 mark overall.

• Senior guard Adam Alfaro (Paloma Valley/Mount San Jacinto College) has played in 17 games and averaged 3.9 points per game for a Cal State San Marcos team that earned its highest ever ranking (No. 8) in this week’s NAIA Division I top 25 coaches’ poll.