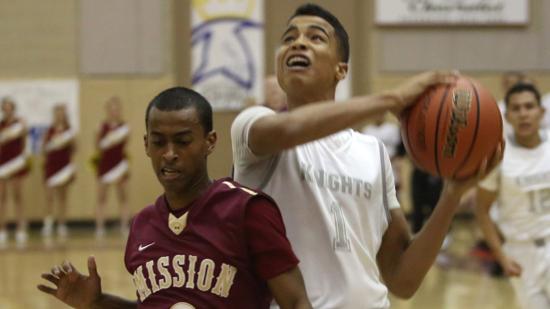 San Marcos' Tristan Neihart goes up for a layup as Kibret Woldemichel of Mission Hills defends.

For San Marcos High, that means playing basketball across town at rival Mission Hills while the Knights’ campus continues its renovation project.

The Mission Hills’ gym has not been a favorite of the Knights thus far.

But on Friday night, San Marcos enjoyed quite a shooting night for three quarters and built an 18-point lead before holding on at the end for a 66-62 win over the Grizzlies.

“They got us last year and the year before,” San Marcos coach Dante Carey said. “This is very big. I’ll have to change my mind about playing here now.”

Tristan Neilhart hit 3 of 4 free throws in the final two minutes to thwart the comeback and secure the win that has the No. 8-ranked Knights (20-3, 4-0) alone atop the Avocado East League.

San Marcos freshman Johnny McWilliams was 10 of 18 shooting from the field, including seven 3-pointers, for a season-high 30 points.

“I thought I had about 20,” said the 6-foot-4 McWilliams. “It’s hard to focus on what you’re doing when the crowd is chanting your name and calling you out. Focusing on the rim sounds easier than it is.

“This is the first game we’ve shot the ball well at all here. I came here four hours before the game to try to find my rhythm.”

McWilliams found it right off the bat, scoring nine points in the first quarter and another 11 to give him 20 by halftime as the Knights left the floor with a 42-27 lead.

He added six more in the third quarter en route to a 48-30 lead.

“It was a magical night for him,” Mission Hills coach Curtis Hofmeister said. “We didn’t do a very good job of cooling him off.”

The No. 7 Grizzlies finally found their stride and outscored the Knights 32-17 to close the deficit to 65-62 with 29 seconds to play.

Kibret Woldemichel, who scored 13 second-half points and finished with 21, hit his fifth and final 3-pointer to give the “visiting” crowd hope for the first time since losing the lead for good at 17-15 in the first quarter.

Neilhart’s final free throw made sure the Knights would enjoy their last “home” game.

San Marcos was aided by foul trouble that plagued Kameron Rooks, Mission Hills’ 7-foot center. Rooks picked up two fouls in the first four minutes of the game, changing the strategy for both teams. He finished with 11 points and six rebounds.

“We haven’t had him in foul trouble much all year,” Hofmeister said. “We did a terrible job without him.”